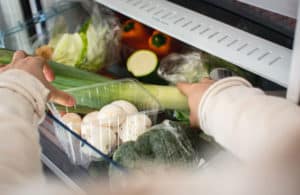 Recently, I watched a captivating video that crystallised the problem of our broken food system in under two minutes. It begins on a farm, where a strawberry is cultivated and harvested. The strawberry is then packed, transported to a factory, wrapped in more packaging, packed in more boxes, then flown to a supermarket.  The strawberry is bought by a family, taken home and put in the fridge. There the strawberry is forgotten, left to rot, then thrown away. So much juicy, nutritious promise, wasted. A long, resource-guzzling journey for a short, uneaten end. Destination, landfill.

This powerful short film illustrates the motivation behind our food sharing revolution, OLIO. While supermarkets are often blamed for food waste, of the 15 million tonnes of food thrown away each year in the UK, nearly half is chucked out by us at home. Households in the UK bin more than £12bn of edible food every year, which equates to 22% of their weekly shop, at a cost of £700 per year for the average family. Whether that’s forgetfulness (in the case of that poor strawberry), caution surrounding food dates, or careless buying behaviour, we’re wasting food on a scandalous scale. Coupled with the 8.4m people in the UK who are too poor to eat properly, and it makes the situation all the more wrong.

OLIO is an app that aims to remedy this, by connecting neighbours with each other so that they can share their surplus food, rather than throw it away. This could be a glut of apples from the garden, food nearing its sell-by date, unused cupboard items, or veggies you won’t use in time. Users snap a picture of their items and post them on OLIO for neighbours to collect. The notion of food sharing has become a bit lost over the years and we’re keen to bring back this ancient tradition, but with a digital spin.

We’re proud to support Jamie’s campaign, and put the ‘sharing’ into the Food Revolution. It seems both immoral and illogical that perfectly edible food is thrown away while so many families and children are affected by food insecurity. Food insecurity often pushes families to seek out cheaper, less healthy sources of calories. So if people can use OLIO to supplement their diet in a positive way, with organic fruit, vegetables and wholesome staples – things that are continuously shared on the app – then our goal is being realised. The most frequently used term on OLIO is ‘organic’, which just goes to show what a rich array of healthy, delicious and wholesome food is at our users’ fingertips – items that can all too often come with a hefty price tag when in the shops.

One of our frequent OLIOers has benefitted in this way. Valentina, a single mother from North London, was off work with long term sickness and was unable to get referred to her local food bank. She used OLIO to source food for her and her daughter which she otherwise couldn’t afford. “There have been tough times where I haven’t been able to put food on the table,” says Valentina. “OLIO has helped me find food and make nutritious meals for my family”.

Lisa, a mother of one on statutory maternity pay also used OLIO to feed her family on a budget. “I’m only receiving basic maternity pay. My 10-month-old daughter has just started on solids, and I’ve managed to get my hands on people’s leftover overripe fruit and organic baby food pouches”, says Lisa. “There’s an increased need for food banks and there’s also masses of food going to waste. It makes sense to create a platform like OLIO where the two issues can be addressed”.

We fully subscribe to Jamie’s global call to arms for a sustainable, secure food future for families and children everywhere. Every child should have access to good, fresh, nutritious food, irrespective of background, and we hope that OLIO can play a part in improving access to food, feeding bellies, rather than bins.

Previous Post: « Food Revolution Day: May 20
Next Post: Jamie’s Ministry of Food: taking the revolution into kitchen across the country »