No matter how often I use sour cream, I feel like I'm never using it fast enough. Sour Cream is one of those ingredients that I'll buy for a specific purpose, like tacos, or baked potatoes, and then it will sit in my refrigerator until I realize it's gone bad, and then I have to throw it away.

I dislike wasting food and tossing out what was recently perfectly acceptable sour cream is a pretty big faux pas in my book. The trick I realized is to figure out a way to either extend my sour cream's shelf life or to devise more ways to put sour cream to work in my cooking.

Though I've been successful in finding new and unique ways to include sour cream in my baking and cooking experiments until recently I'd had little luck figuring out how to keep my sour cream fresh longer. 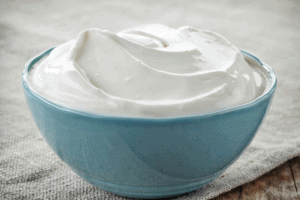 Can you freeze sour cream?

The short answer to this question is, yes you can freeze sour cream, but the long answer is a little more complicated.

While frozen sour cream is great for a lot of things, the freezing process results in a pretty drastic texture change and it's not necessarily suited to all the same tasks where you might use fresh sour cream.

Freezing fermented dairy products is often a problem because after the frozen dairy has thawed it takes on a grainy texture that's also more watery than the unfrozen version. While you might not want to top a baked potato or a bowl of chili with a frozen and thawed sour cream, you can absolutely use it for things like baking, or sauce making without a problem.

How to freeze sour cream.

When freezing sour cream at home I like to freeze it in an ice cube tray. Though you can absolutely freeze sour cream in a bulk container, it makes it less than ideal to use because you need to thaw the entire container. This may not be an issue for you, but I think it undermines the entire point of freezing the sour cream in the first place.

Using an ice cube tray also results in a much more preferable texture when you finally defrost the sour cream and put it to use. By portioning it into a smaller container like an ice cub tray it becomes easier to freeze quickly, which results in a smoother, more acceptable sour cream when thawed. .

Sour cream will last for up to 6 months in the freezer, so make sure to label and date the container to help keep a track of its remaining shelf life

How to thaw frozen sour cream.

The best way to thaw frozen sour cream is to place it in the fridge in a bowl and let it defrost naturally. This method usually takes a day or two, but if you have the ability to plan ahead it is also the best way to maintain a great texture.

Because of their small size, sour cream ice cubes do a great job of defrosting quickly, usually in hours, and you can pre-measure your sour cream by weight before thawing if you are planning on using it for baking or sauce recipes.

You can use a running water thawing method if you absolutely need to have your frozen sour cream thawed in a hurry. However, be careful, this method can introduce added liquid that will water down the sour cream and its flavor. To start place your sour cream cubes in an airtight container like a freezer bag and place the bag in a bowl in the sink. Run a slow stream of cool running water over the bag until the sour cream has fully defrosted.

Where to use frozen sour cream?

Now that you've frozen your excess sour cream and thoroughly avoided any food waste, it's time to talk about ways to put it to use!

Frozen sour cream works great in baking recipes, like pancakes, coffee cake, and banana bread, or basically any batter/bread recipe where you would normally use fresh sour cream. Because the sour cream is being incorporated into a batter or dough, the slightly grainier texture won't have any effect on the quality of the final product. You can also use frozen sour cream as a substitute for other dairy products in a pinch like mascarpone cheese, or cream cheese!

Frozen sour cream also works really well in smoothies or pureed soups, especially when it's frozen in ice cube form. In smoothies, the small, frozen blocks of sour cream add an awesome sour flavor, and a ton of body to your morning smoothie, making it something closer in texture to a milkshake. Like yogurt, sour cream is produced with probiotic lactic acid bacteria that not only tastes great but is also good for your gut health.

Sour cream is an awesome addition to any pureed soup, from tomato to carrot ginger or spring pea and asparagus, sour cream adds a great acidity and richness to the final product that's hard to beat. To use frozen sour cream simply replace the fresh sour cream in your favorite pureed soup recipe. If you are pureeing the soup while hot you can also just put the frozen sour cream ice cubes directly into the soup without the need to defrost it first.

Freezing dairy products is a great way to extend their shelf life whether cottage cheese, cream cheese, yogurt, or sour cream. Freezing excess products can help eliminate food waste and save you money, but it's important to recognize that after freezing you may notice a change in its consistency.

As long as you stick to using your frozen sour cream in recipes where you won't notice a slight consistency change you should be able to put it to use without a problem. On the other hand, if you are topping a baked potato or fresh bowl of chili, go ahead and use the fresh stuff!