When the Ice Cream Melts

You’ve got a carload of groceries and one after another, additional errands keep popping up, keeping you out longer than planned. No big deal, you didn’t buy anything that needs to get straight into the freezer anyway, right? Right….?

Not so lucky! Later, upon unloading, you discover that you did in fact buy that carton of mint chocolate chip you were debating on and now the whole tub has had plenty of time to melt completely. 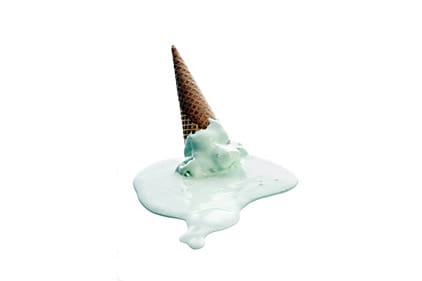 Chances are you've found yourself in a situation similar to this a time or two. Don't worry, we’ve all been there. So now what to do? Can you refreeze melted ice cream? Is it safe to eat ice cream that has been refrozen? Does refrozen ice cream even taste good? We'll answer these questions and get you back to the important business of eating ice cream in no time!

Is it Possible to Refreeze Melted Ice Cream?

In simple terms, no, ice cream cannot be refrozen after it has melted. The reasons for this are two-fold: first, the issue of food safety and second, the melting and refreezing process will have undesirable and unavoidable consequences on the texture of the ice cream.

First and foremost, melted ice cream presents a major food safety issue. We're all familiar with the concept of keeping cold foods cold (please take this moment to appreciate the invention of the refrigerator!), but just why is this temperature control so important? The answer lies in what we know as the "temperature danger zone", which exists from 40℉ to 140℉. Within this range, the conditions are just right for bacteria to rapidly multiply, sometimes doubling their numbers in as little as 20 minutes!

Thanks to the milk and egg products that form the base of most commercial ice creams, it's not uncommon for bacteria such as listeria and salmonella to be present, even in unopened ice cream. These bacteria are known culprits of food poisoning and therefore, allowing these bacteria to get warm and multiply within your seemingly innocent tub of ice cream would pose a huge risk of severe illness.

Once the bacteria growth has occurred in melting ice cream, it unfortunately cannot be undone by simply returning the carton to the freezer. The harmful bacteria will still be present, and should you decide to go ahead and eat ice cream that has melted and refrozen, you are still at risk of food poisoning.

Think of melted ice cream as any other dairy product. You wouldn’t feel safe drinking milk that has been left out of refrigeration for an extended period of time and then put back into the fridge, right? As a rule, any refrigerated foods that have been left out for a few hours or longer should be discarded. Always better safe than sorry, especially when it comes to food poisoning!

If the risk of serious food poisoning isn’t enough to deter you from attempting to refreeze ice cream, another issue is that refrozen ice cream most likely won’t taste all that great. While it's true that the yummy flavors will be there regardless of any melting, one can argue that half (or more than half if you ask us!) of the enjoyment of eating ice cream comes from that satisfyingly smooth texture we all know and love. 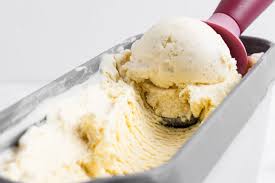 Once melted, it's near impossible to refreeze ice cream and return it to its original texture. To understand why ice cream's texture changes once it's melted and refrozen, let's take a look into the process by which ice cream is made.

What Makes Ice Cream So... Creamy?

That irresistibly creamy texture that you look forward to upon settling down to eat ice cream is entirely dependent on the churning action of an ice cream maker during freezing. Churning is vital for the two key factors that are responsible for ice cream's texture:

As the ice cream maker churns, air is incorporated into the ice cream base, which results in a light and fluffy final product. Think of the difference between a bowl of heavy cream and a bowl of whipped cream. The heavy cream is dense and thick while the whipped cream is light and fluffy. The only difference between the two? Air!

Ice crystals are the second factor that give ice cream its unbeatable texture. The constant movement of ice cream during the freezing process is important for keeping these ice crystals teeny tiny. This makes for a smooth texture, whereas larger ice crystals would make the ice cream rough and crunchy.

Can You Fix the Texture of Refrozen Ice Cream?

Once ice cream has melted and refrozen, the texture will be altered in a way that can't be fixed. As the ice cream melts, it loses all of the air that was incorporated during the churning process. Upon refreezing, those perfectly tiny ice crystals cling together, forming large groups. The result? A disappointingly dense block, difficult to scoop and full of crunchy icy bits!

So, Can You Ever Eat Melted Ice Cream?

After all of that food poisoning talk, it might surprise you to hear us say yes, there actually are 2 circumstances in which it would be safe to consume melted ice cream!

Circumstance Number One: If the ice cream in question has been out of the freezer for no longer than two hours, it will be only partially melted and therefore still retain enough cold temperature to be safe for consumption. After this point, it will be at risk of entering the temperature danger zone, so best to throw it out and get a new tub!

Circumstance Number Two: If the ice cream has melted completely but been under refrigeration the whole time, it would actually be entirely safe to consume. This situation may seem unlikely, but who hasn't had one of those moments during grocery unpacking where you put things away in the wrong places? It's possible that some of your frozen food might get accidentally placed into the fridge overnight, and although completely defrosted, the ice cream in this case will have stayed cold enough to be safe.

Ideas For Using Ice Cream That Has Melted (Safely!)

So, what else can you do with melted ice cream aside from toss it in the trash and head back to the store? If the ice cream has melted in one of the aforementioned safe ways, there's truly no need to waste it.

Go Ahead, Eat it.

That's right, that melted ice cream will still be delicious as is. In fact, some might argue that partially melted ice cream might just be more delicious than its fully frozen counterpart. Who remembers being a kid, stirring and stirring your bowl of ice cream until it was soft, smooth, and oh so spoonable? If your ice cream has melted safely, give yourself a tasty gift of nostalgia and slurp it right down!

Jazz Up Your Coffee

If you take your coffee with milk and sugar, get ready for a treat. Brew yourself a fresh pot and top it off with a spoonful! Once you experience this cup of joe, you might feel compelled to keep melted ice cream on hand at all times. We're right there with you.

Use it as a Sauce

When ice cream melts, it essentially becomes a custard sauce. Known in French cuisine as creme anglaise, this sauce is to die for when poured over warm desserts such as pie, fruit crisps, or cobblers. Get ready to discover that you can eat ice cream for breakfast, as melted ice cream is delicious when drizzled over pancakes or waffles!

Use it in a Milkshake or Smoothie

Melted ice cream makes the perfect base for a milkshake or smoothie, just add fresh fruit and ice, or any type of frozen fruit you have on hand. 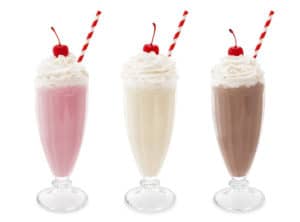 Bottom line: it's not recommended to refreeze ice cream after melting has occurred. The conditions in ice cream are prime for bacteria growth and as a result, the risk of food poisoning is high. Besides that, the dreamy creamy texture you're craving would simply not be satisfied if you tried to eat refrozen ice cream.

That said, melted ice cream is no reason to scream! There are a couple circumstances in which your ice cream blunder can be put to good use: if it’s slightly melted due to being out at room temperature for 2 hours or less or if it’s fully melted but has been under refrigeration the entire time. If you find yourself with one of these two delicious situations on your hands, get creative and enjoy your mistake in an unexpected way.