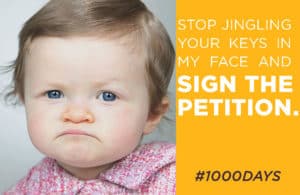 In Brazil, the Olympics are bringing nations together, and governments from around the world are using the occasion to celebrate gains made against malnutrition and gear up for another round of action.

Each year, malnutrition claims the lives of almost 3 million children, robs over 2 billion people of their health and wellbeing, and costs the global economy over $3 trillion in lost productivity and healthcare costs. It is a massive problem that causes untold suffering. Yet governments have historically undervalued nutrition – only 1% of official aid money is spent on the type of nutrition-specific programs that deliver high-impact, life-saving change.

The tide is, however, beginning to turn. Over the past few years, momentum to fight malnutrition has been steadily building and on 4 August , the torch was officially lit!

This summer, the Brazilian, British and Japanese governments united in Rio to host a Nutrition for Growth moment. Together, champions including Jamie Oliver, Director-General of the World Health Organization Margaret Chan, the Director-General of the Food and Agricultural Organization Graziano da Silva and Kenyan athlete Tegla Loroupe kicked off the race to end malnutrition.

While this meeting demonstrates the developing political will, recent analysis shows that the world still has a long way to go before we can meet global nutrition goals. The world needs to invest an additional $7 billion a year over the next 10 years to help mums and babies everywhere reach their full potential through basic nutrition.

Your voice is needed

Leading nutrition charity 1,000 Days is calling on everybody to lend their voice and advocate for increased investments in nutrition in the critical first 1,000 days between a woman’s pregnancy and her child’s second birthday.

The Olympic athletes who helped us tell world leaders that every child deserves a fair start are competing as we speak, so 1,000 Days have enlisted a new group of advocates to carry the torch: grumpy babies. As we all know, a grumpy baby is a force to be reckoned with, and these babies are no exception. Check out their newest video to help spread the word.

If you haven’t already, please sign and the petition, and share this video with your friends. Together we can end malnutrition and truly start a #FoodRevolution.