Growing up I remember using the word flapjack and pancake interchangeably. In my mind, they both meant flour-based griddle cakes we'd make on Saturday or Sunday mornings. Rich and fluffy, with warm yummy butter and sweet maple syrup, they went best with cartoons and pillow fights.

Recently I was having a discussion with some friends from across the pond and the subject of breakfast foods came up. Someone had said their favorite breakfast was a short stack of silver dollar pancakes, and I replied "oh yeah, I love flapjacks" to which my British friends were visibly confused.

It seems that while we in the USA use flapjacks and pancake synonymously, abroad they are two very different things. After consulting with some of my British friends and diving into cookbooks and recipes, I began to understand the Flapjacks vs. Pancakes have a much more complicated relationship than I would have imagined.

Flapjacks vs Pancakes in the USA

When I was younger flapjacks and pancakes seemed to mean the same thing. I always called them pancakes but I found older generations and folks from different parts of the country often referred to them as Flapjacks as well.

Pancakes or flapjacks in the USA are a pour-batter style griddle cake made from flour, milk, eggs, sugar, salt, oil or butter, and baking powder. There are a ton of different dry mixes you can buy at the grocery store but you can most likely make them from ingredients you already have in your pantry at home.

There are some regional variations on pancakes throughout the country, one notable variation on the theme would be Dutch Baby Pancakes a german style pancake that's a favorite in the Pennsylvania Dutch communities of Central Pennsylvania.

A Dutch Baby Pancake is a hybrid, kind of like a cross between a pancake and a popover. They are light, fluffy, and great with syrup, butter, or fruit toppings, but they do take longer to prepare than traditional pancakes, and often require a cast iron pan for the best results.

One of the most common variations on traditional pancakes would be fillings or fruit toppings. From bananas to blueberries or chocolate chips it's easy to your favorite flavors your pancakes with incredible results. One of my personal favorites is pumpkin pie pancakes on a cool autumn weekend morning with a warm cup of coffee.

Here's a list of some of my favorite pancake fillings/toppings: 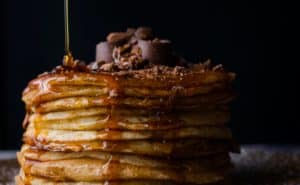 Pancakes or flapjacks are also often called Hot Cakes from time to time, but they are all same thing, flour-based griddle cakes. One reason for this may be the popularity of the McDonald's Hot Cakes breakfast meal, which was the more popular term for pancakes at the time McDonald's introduced their breakfast menu.

If you've spent time in the northeast you might also be familiar with Johnny Cakes, which though similar to pancakes are made from cornmeal with a chewier, crunchier texture. In the south corncakes are called "hoecakes" but they are more often a savory recipe and served with lunch or dinner.

Flapjacks and Pancakes in the UK.

As I mentioned earlier it was a conversation with some British friends that sparked this discovery, to begin with. While Pancakes in the United Kingdom are the same dish we enjoy here in The United States, flapjacks are a very different food item abroad.

Pancakes in the UK.

If you find yourself traveling the United Kingdom and suddenly find yourself craving a short stack of pancakes, then you are in luck, because you'll find them much the same as you would here in the USA.

Pancakes abroad are flour-based, baking powder risen griddle cakes often served with butter and syrup. You'll find many of the same toppings and flavor combinations you've come to love, whether you're looking for chocolate chip pancakes or blueberry recipes, you should have little trouble acquiring a plate of hotcakes. 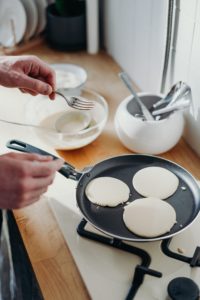 While pancakes are common region to region and abroad, Flapjacks on the other hand are a very different story. Flapjacks originated in Britain and are tray-baked bars made from oats, brown sugar, golden syrup, and butter.

This would be considered a "tray-bake" recipe, and if you are familiar with the Great British Baking Show you'll already be familiar with that term. A dough or stiff batter is made from the ingredients and then pressed into a baking pan and baked until golden brown and crispy.

With a much stiffer texture like soft-baked granola bars, Flapjacks make a great light breakfast with a cup of coffee when you are on the run. These sweet, delicious oat bars are often served with a shmear of chocolate icing or by themselves, and these delicious Muesli bars make a great pantry staple as they can last for 3-4 days without getting stale.

Crumpets are another baked good that originated in the British Isles and it is very similar in preparation to pancakes. The major difference between the two the consistency of the batter. Pancakes are made with a thinner batter that creates a flatter, plate-shaped disks or fluffy, griddlecake goodness.

Crumpets on the other hand have a much stiffer batter. This allows them to take on a breadier, biscuit-like shape that works well for spreading jam or butter, but they also take much longer to cook. Both are delicious and overall have a similar texture but, they are definitely different culinary experiences overall.

Where do waffles fit in?

Waffles are similar in composition to pancakes, or crumpets, they are made from a batter composed of eggs, butter, flour, baking powder, sugar, and salt. The major difference here is the preparation method.

While pancakes or flapjacks are prepared in a frying pan or a griddle, waffles require a piece of equipment called a waffle iron. These come in a ton of different sizes and shapes, depending on your needs. There are even cast-iron versions built for use on a grill or over a campfire when camping.

Like pancakes, you can fill waffles with everything from fruit to candy. Simply pour the waffle batter into your waffle iron and sprinkle in your favorite toppings!

While pancakes and flapjacks in the United States are essentially interchangeable words for the same thing, in Great Britain Flapjacks or muesli bars are very different from the griddle cakes we know as pancakes. Made from oats, brown sugar, golden syrup, and butter, Flapjacks are a delicious tray baked oat bar that makes for a wonderful breakfast on the go or a light snack over coffee or tea

Whether you're in the mood for a stack of American flapjacks/pancakes smothered in maple syrup and fresh creamy butter, or you've got a hankering for a British Flapjack or tray baked oat bar, either will be delicious and now you know the difference!