Ice cream needs no introduction, but let’s start off on the right foot and do a quick recap of the basics anyway!

Ice cream is a frozen dessert consisting of a sweetened dairy mixture, which is churned during the freezing process. This movement causes tiny ice crystals to form, as well as disperses small air bubbles throughout the ice cream, giving it that uniquely light and fluffy creamy texture.

Like most dairy products, your typical ice cream is high in moisture and sugar, making it extremely prone to spoilage. On top of these standard shelf life issues that come along with any dairy item, ice cream has the added challenge of being frozen, giving it yet another sensitivity to be aware of when it comes to storage.

Therefore, proper food safety techniques must be employed when it comes to storing ice cream. Provided you’ve done everything right, how long does ice cream last? Let’s find out!

How Long is Ice Cream Good For? 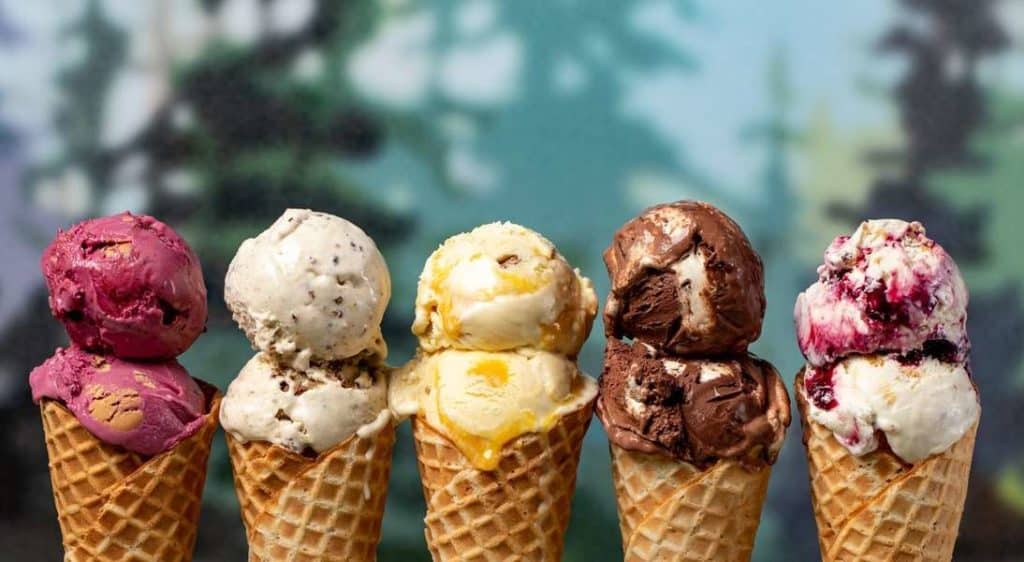 The shelf life of ice cream depends on what type of ice cream you have, whether homemade or store bought, and what state it is in, from unopened to opened.

In many cases, the ice cream will still be good beyond the printed expiration date, because unlike other milk products, the date offered on ice cream is typically a “best by” date, rather than a hard and fast date of expiry.

Unopened ice cream which has been purchased from the store lasts the longest due to the fact that it is factory sealed and therefore has not yet experienced any air exposure. In addition, the fact that it remains sealed likely means that it hasn’t been in and out of the freezer multiple times. Since it has been kept at a stable, frozen temperature the whole time, ice cream in this condition has more time on the clock than opened ice cream.

Improper freezer temperatures will make brand new ice cream go bad just the same as that which has already been opened, but generally speaking, sealed ice cream will last 2-3 months beyond the printed date.

The problem with opening that carton of ice cream is that you are immediately exposing it to air and temperature fluctuations. But alas, it must be done in order to eat the good stuff!

No matter how far into the future the printed date may read, once opened, the shelf life of ice cream takes a serious turn for the worse. The viability of your ice cream reduces each and every time you bring the carton out of the freezer and place it back in, so be mindful of how many times you’re reaching for it!

As long as it is in a safe and stable area of your freezer, ice cream should last for about 1-2 months after opening.

Homemade ice cream tends to have a much shorter shelf life than commercially produced ice cream as it doesn’t contain the same stabilizers and preservatives which help to bump up the shelf life of store bought ice cream. The same goes for ice cream that you may have purchased from a local shop, as these types of places frequently offer hand-packed, small-batch varieties. 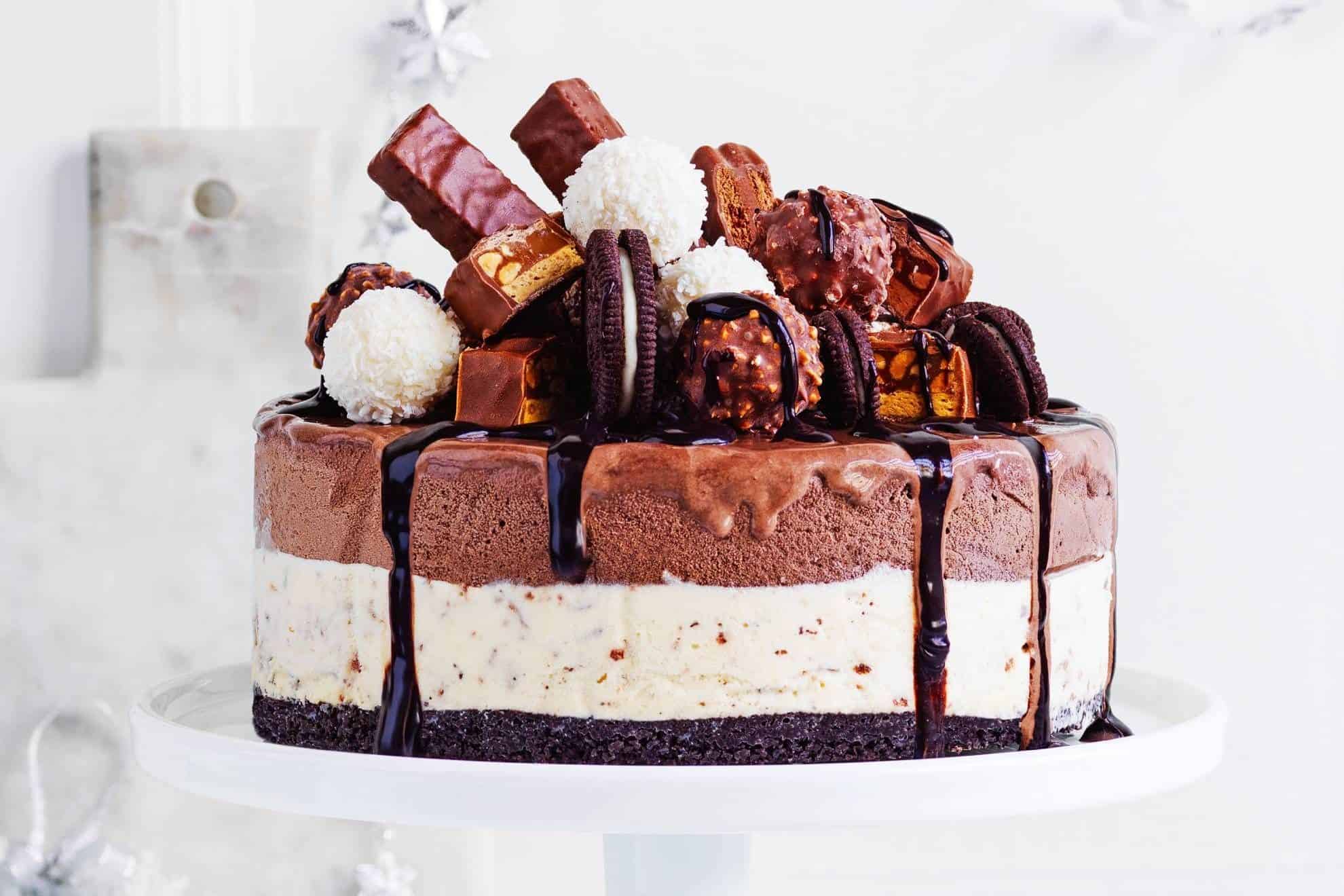 Sadly, that celebratory ice cream cake has the shortest shelf life of all. This is due to the fact that most ice cream cakes contain a slew of other components aside from ice cream itself, from whipped cream frosting and candy, to fruit filling or cookie crumbles. In addition, ice cream cake is most likely to be exposed to room temperature for longer periods of time for presentation and candle-blowing reasons of course!

Do your best to eat leftover ice cream cake within 7-10 days after getting it. Hey, it’s a tough job but someone’s gotta do it.

Issues With Ice Cream as it Ages

As it ages, ice cream experiences changes which are not only unpleasant to your taste buds but could also pose hazards to your health as well. We’ve divided these issues into two main categories: those that affect ice cream’s quality, and those that contribute to the risk of foodborne illness.

Over time, ice cream will slowly lose its original flavor. This is in part because the flavoring ingredients in the ice cream deteriorate and become less pronounced as they age. For example, the frozen fruit in a pint of strawberry flavored ice cream will become freezer burned and less tasty, while exposure to air will cause those flecks of vanilla bean to lose their potency.

Then there is also that fact that ice cream is very sensitive to absorption of odors from other foods in the freezer, or from the freezer itself, taking away from the flavor of the ice cream as well. Ice cream will have optimal taste as long as it remains unopened, but once the seal is broken, the time on the flavor clock starts ticking.

In addition to issues regarding deterioration of taste, ice cream also goes through textural changes which take away from the enjoyable experience you look for in a bowl of ice cream. Those tiny ice crystals which are suspended within the creamy mixture will begin clumping together and forming larger crystals, taking the texture from smooth to icy as they do so. Also, the all-important air that is whipped into ice cream slowly escapes over time, making the ice cream increasingly dense and hard rather than light and fluffy.

There is a common misconception that storing food in the freezer means it will keep indefinitely. While it would be nice to have such a permanent way to store food, this is unfortunately not the case!

While sub-zero temperatures cause bacterial reproduction to slow way down, the process is not halted entirely. Therefore, bacteria do continue to grow in foods while they are held in freezing temperatures, just at a slower rate and with sometimes less noticeable effects. Products with a high moisture and sugar content, such as ice cream, are especially at risk.

How to Tell if Ice Cream is Bad 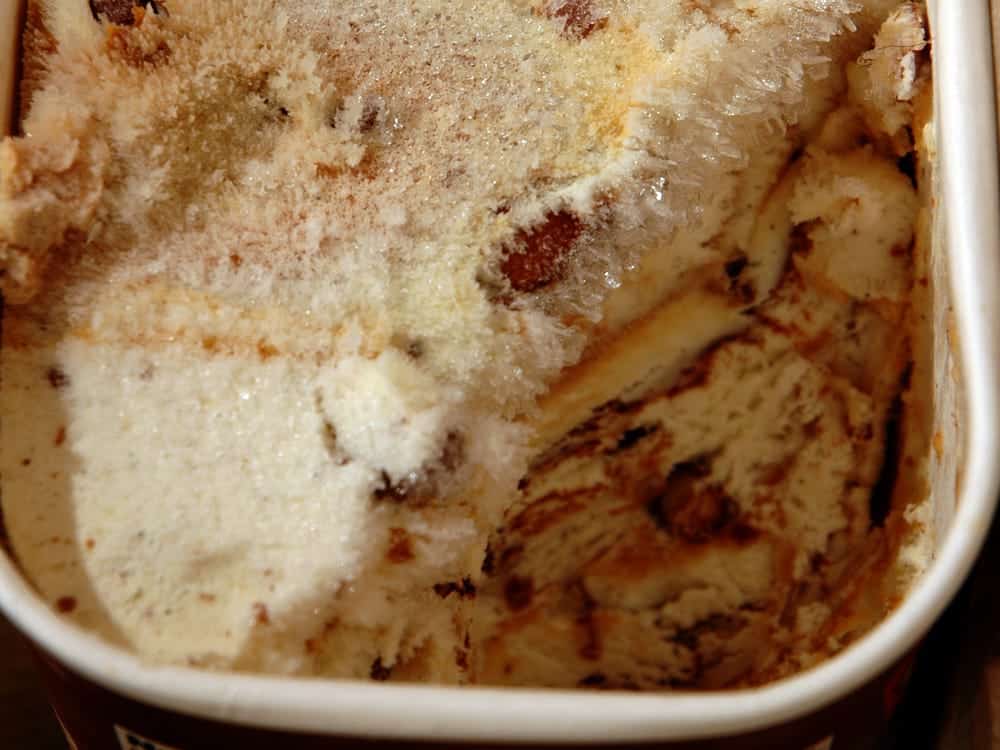 There are several signs to look out for when it comes to determining if your ice cream is simply losing some of its quality, or if it is downright unsafe to consume.

Remember, expired ice cream is not necessarily bad ice cream! Ice cream can last well beyond the date stamped if it has been safely stored, so it’s therefore most important to check your ice cream for signs of deterioration rather than relying on a printed date. On the flipside, since there are so many factors at play, ice cream can go bad before the expiration date as well, so staying vigilant is the best way to prevent foodborne illness.

While many folks associate the term freezer burn with the appearance of those pale, dried spots that appear on frozen food, you might not know that freezer burn is actually a type of dehydration that occurs at frozen temperatures!

Through a phenomenon known as sublimation, frozen water is able to slowly move from within a food and dissipate into the surrounding air. Think of this like evaporation, except there is no liquid water involved, only frozen water.

The result of this is that the food becomes dried out, initially just on the surface which has the most air exposure, but with time the dryness can permeate the bulk of the food as well. When it comes to ice cream, the signs of freezer burn to look out for are a dried or discolored appearance, or a hard, gummy texture on the surface which is difficult to push your spoon or ice cream scoop through.

The formation of ice crystals is another sign that your ice cream is in the process of going bad. This appearance of these crystals is related to freezer burn, as when the water leaves the food it often collects on a nearby surface, but these two phenomena can also occur independently of one another. Sometimes ice crystals occur as a result of outside moisture being introduced into the container, or the moisture that escapes during freezer burn is lost to the ambient air of the freezer itself.

Important note, if you are shopping for ice cream and see containers that have crystallization on the outside like this, do not buy them! The presence of ice on the outside of the container is a sure sign that the ice cream has experienced temperature fluctuation, which may make it unsafe to eat or at the very least, has affected the texture.

Eventually, all of this moisture loss and ice crystallization have some dire consequences on the overall texture of the ice cream. Over time the ice cream will turn gooey and sticky in texture, sometimes with a slimy texture near the surface or along the sides of the carton.

This is because of the fact that without air and ice crystals, ice cream is just that–a sticky, liquid base! Ice cream in this state is entirely unpleasant and not at all worth eating, aside from the fact that at this point, chances are extremely high that harmful bacteria is afoot.

How to Store Ice Cream 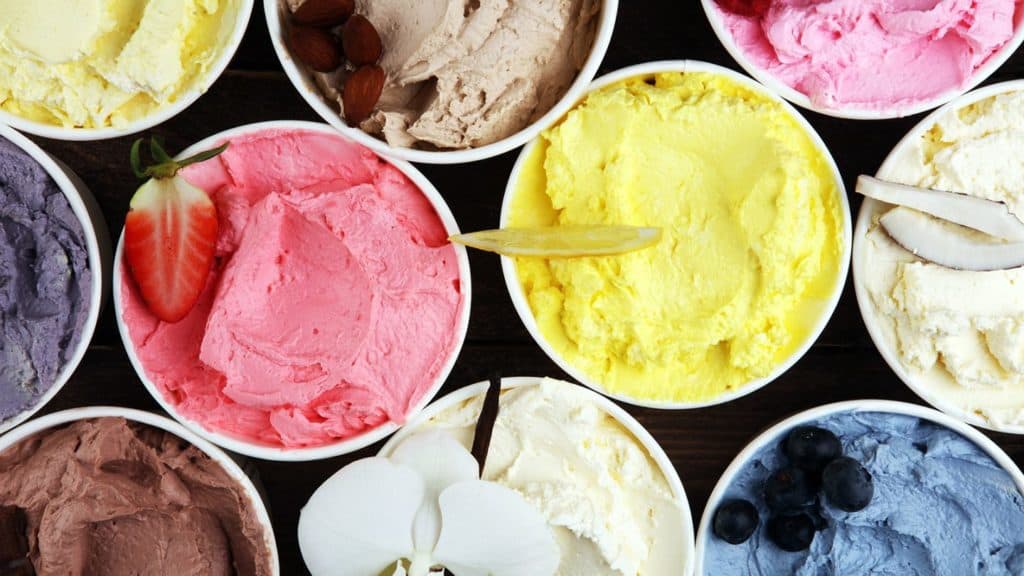 When stored properly, ice cream can have a long and healthy shelf life! Put these tips to use to keep your ice cream delicious and safe to eat for as long as possible.

At maximum, ice cream lasts for about 2-3 months beyond the best-by date stamped on the label. This only applies to ice cream which is store bought and unopened. Once opened, your ice cream will quickly begin deteriorating and has only about 1-2 months left before it should be discarded. Homemade ice cream and ice cream cake are in entirely different boats, and both of these types of ice cream have only a couple of weeks at best.

Keep a close eye on your ice cream for signs of age, such as ice crystallization and freezer burn, and if at any point you open the container to find it has become a gooey and icy mess, throw it away ASAP! No matter how tasty it was, no ice cream is worth suffering through unpleasant tastes and textures or risking illness.