There aren’t many things in life that taste even remotely as delicious as seafood. Whether you’re having canned tuna or sushi, there’s nothing quite like it.

If you’ve never known the taste of mussels or clams that melt in your mouth, let’s just say you’re missing out on the experience of a lifetime. 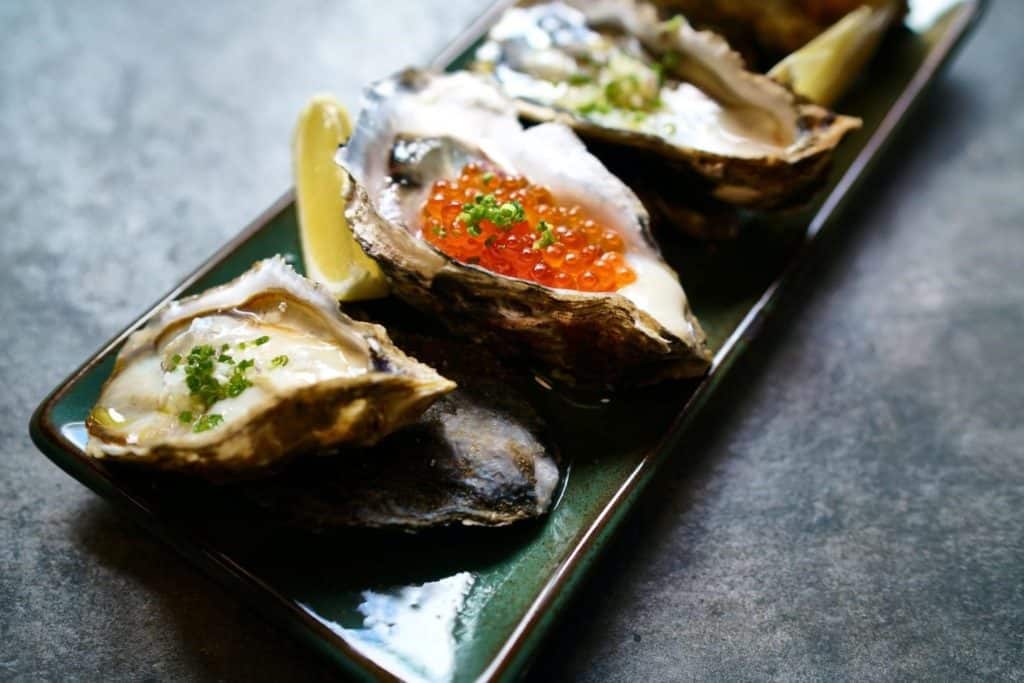 That aside, several seafood lovers often get oysters, mussels, and clams confused. While many are aware that they taste different, most people aren’t sure what other contrasts exist beyond their respective flavor profiles.

Without further ado, here’s the low-down on everything you need to know about oysters and mussels vs clams.

Oyster refers to the several different families of bivalve mollusks that inhabit saltwater. The term “bivalve” means that the mollusk has a compressed body that’s enclosed in a hinged shell.

People either love or hate oysters. They hardly ever garner “mehs”…

Aside from the fact that they’re consumed raw accompanied by a bottle of bubbly and that pregnant women should stay away from them, there’s a lot that may surprise you about these mollusks.

Olympia oysters have small, round, and smooth shells with a little iridescent coloring. Kumamotos look similar to Olympias, although their shells are pale. Atlantic oysters generally have a teardrop or comma shape and tend to be quite large.

On the other hand, the European flat is equally large and has a straight shell with fine ridges. The Pacific oyster looks a lot like the European variety except that it has smaller, more wavy casings.

Here’s a fun fact about oysters. Each of these mollusks filters between 30 and 50 gallons of ocean water a day. Think about how much water an entire bed of them can clean.  This makes them not only tasty but great for the environment as well.

You’ve probably heard that oysters are great for revving up your sex drive. While that might very well be true, it doesn’t tell the whole story.

These tasty mollusks are rich in zinc, which is not only great for your reproductive health but also boosts your immune system and strengthens your bones. It even helps ease rashes and get rid of acne.

Ever wonder why people say you shouldn’t eat oysters in the months that don’t have the letter “r” in them? Think – May, June, July, and August. It’s because it’s a lot harder to keep them fresh in the summer heat, particularly before you refrigerate them.

There’s also the fact that bivalves spawn during this period, which gives them a somewhat weak and watery flavor. Not to mention that oysters just taste better when the water is colder. Now that’s when they truly thrive.

As far as food pairing goes, if you thought the taste of champagne with oysters was out of this world, you haven’t had them with absinthe. There’s something so remarkably tantalizing about combining these briny, mineral-rich mollusks with the soft mint and fennel of absinthe that breathes new life into each flavor in a unique way. 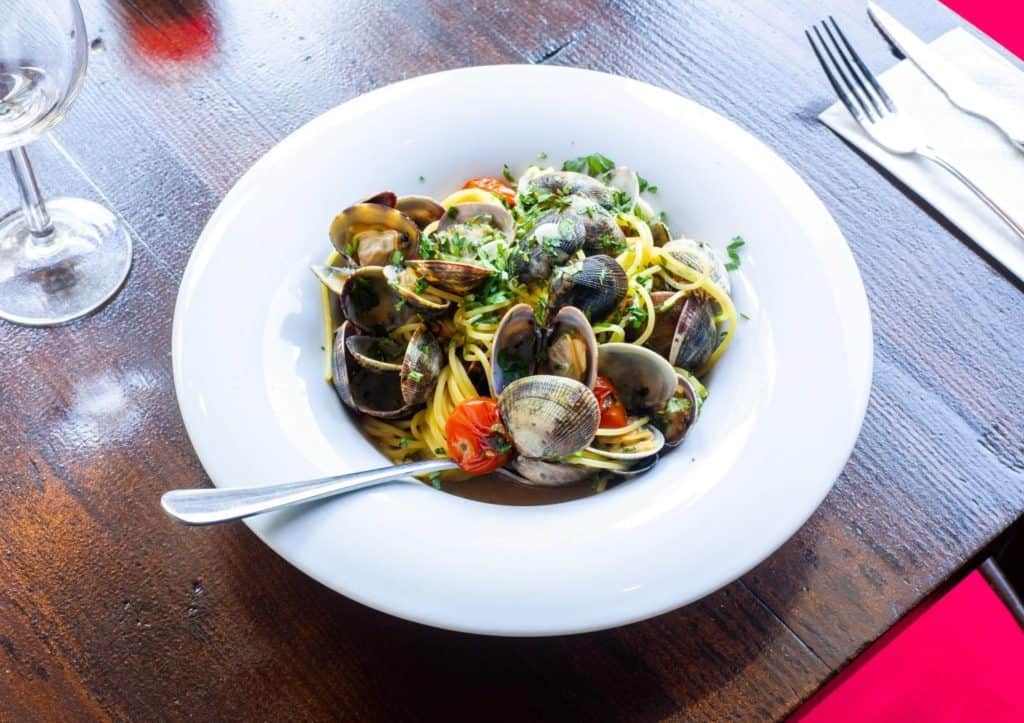 A clam is also a type of bivalve mollusk that lives on the ocean floor, although you will find them in freshwater bodies as well. If you are taking baby steps as you venture into the mollusk family of seafood, clams are a great way to ease you in.

Although you can eat them raw and should be aware of the associated risks of consuming them in that form, they are great candidates for breading, frying, and grilling.

There are roughly 150 different types of edible clams that exist, but only a handful of them are commercially available. Here are some of the common ones you’re likely to come across in your local farmers’ market.

Pronounced “gooey-ducks,” these are quite popular in the Northwest Pacific, as well as Asia. They have a chewy, almost crunchy texture and a delicious briny flavor. The two common species of geoduck clams are the Pacific geoducks and the Atlantic geoducks.

The two are virtually indistinguishable, with shells measuring between seven and nine inches in length and siphons that grow up to four feet long. This makes them the largest burrowing clams in existence. 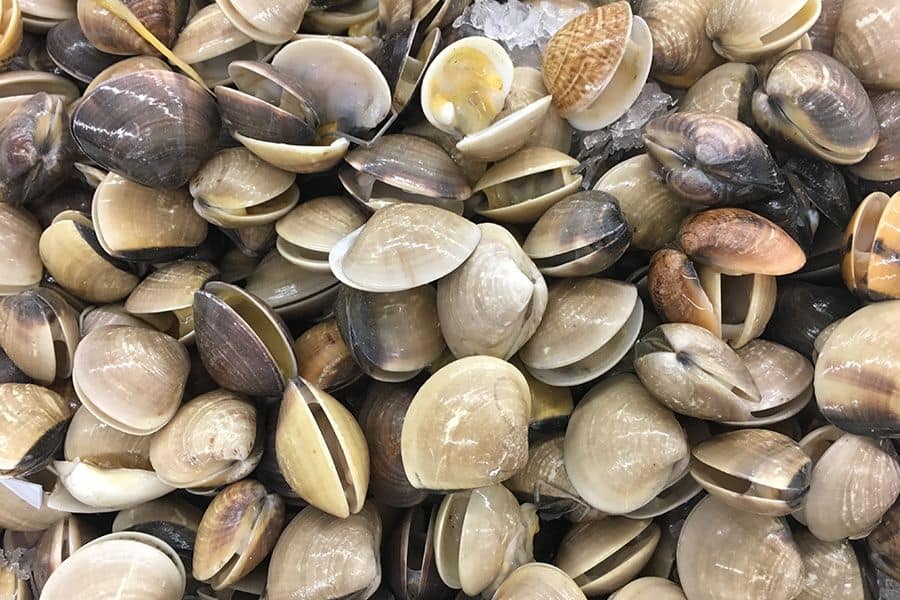 Also known as quahogs, two main varieties exist. There are the Northern quahogs that live in the intertidal zones of the Atlantic coast between the Gulf of Mexico and the Gulf of St. Lawrence. These have shells that measure anywhere between 1.5 and 3.5 inches.

There are also the Southern quahogs found in the intertidal zones between the West Indies and the Chesapeake Bay. These can grow up to six inches long.

Hard clams can be eaten raw, grilled, stuffed, or broiled. 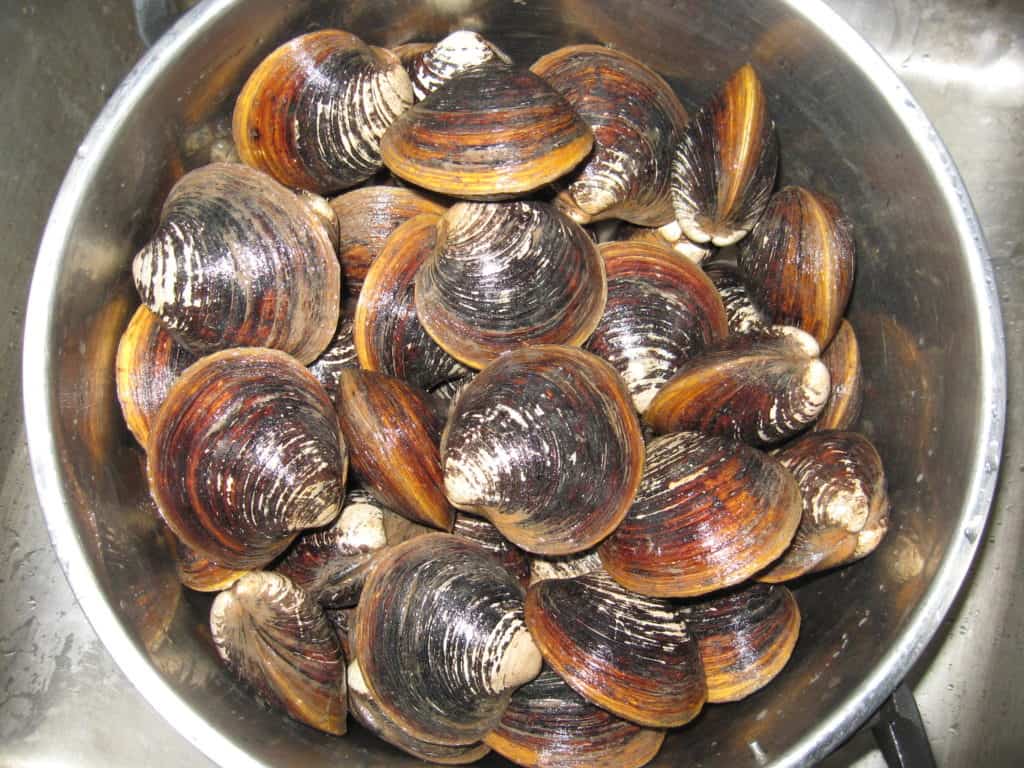 Also known as ocean quahogs, these clams are found in the North Atlantic region, particularly around Maine. Their shell shape is round and is typically dark brown or black.

They reach maturity after six years and can live for up to 100. They have a much stronger flavor compared to their hard clam cousins and are well suited to making pasta dishes. 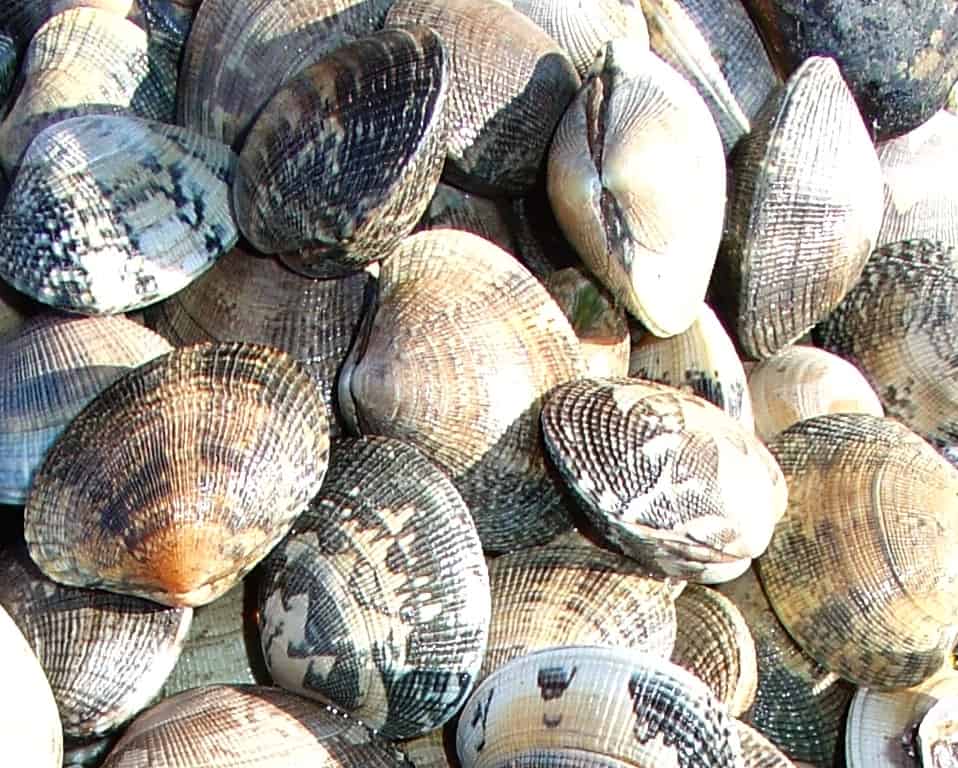 Also known as steamer clams on the West Coast, these mollusks are a type of small, hard-shell clam found in the Pacific Ocean. They have a sweet flavor and are less briny compared to other clam varieties.

You can eat them raw or steamed or use them in a host of pasta dishes. 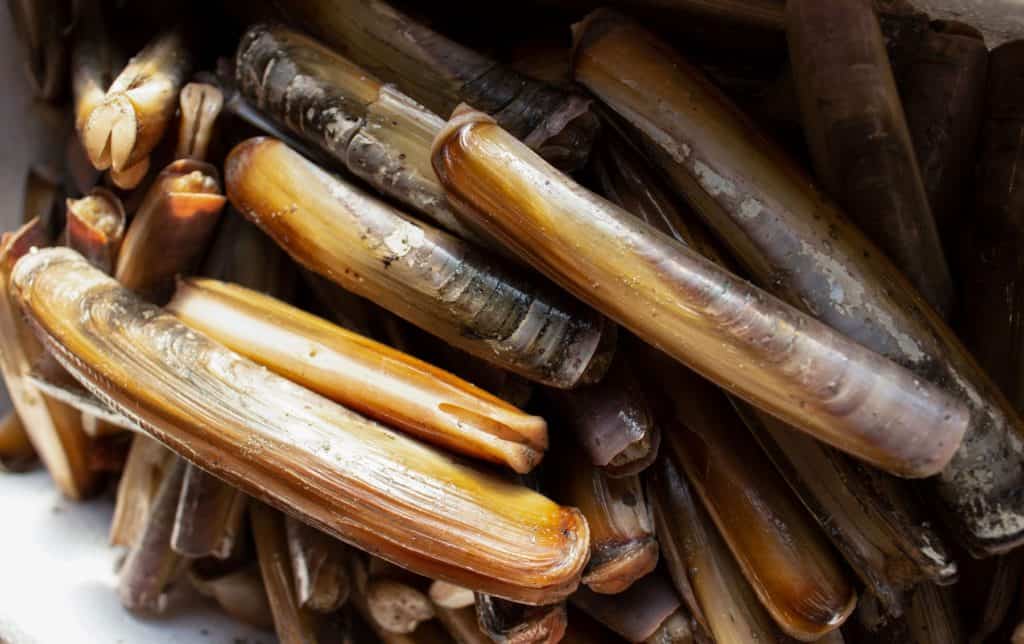 These have brittle shells that gape open. Pacific razor clams have oval-shaped shells with long, protruding siphons. They are sweet and tender and can be eaten raw.

On the other hand, Atlantic razors have a milder flavor compared to their Pacific counterparts and have shells that measure up to eight inches long. They are best grilled or steamed. 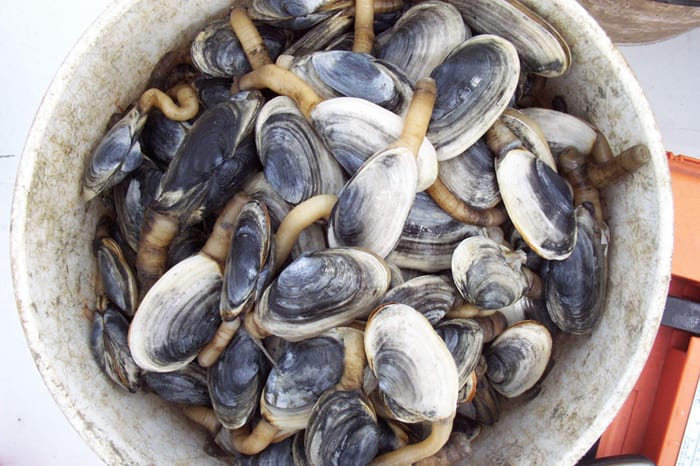 These have thin, brittle, oval-shaped shells that are grayish-white in color with long siphons. They can grow up to six inches long and are best steamed or deep-fried and served with butter. The larger clams are great for making chowder. 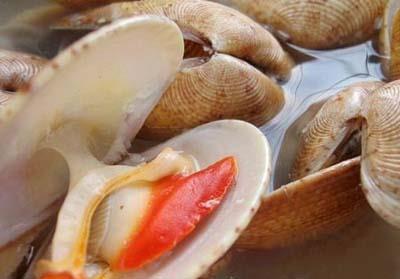 Surfs account for about 33 percent of the clams harvested in the US. They live in deep water and are mainly found off the coast of New Jersey. They grow up to six inches long, making them perfect for clam chowder. 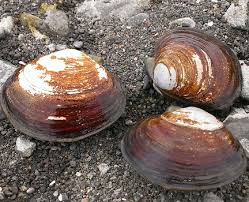 Also known as butter clams, these mollusks are best known for their melt-in-your-mouth feel. There are two main types of Washington clams you might come across.

There’s the Northern butter clam that’s found in the ocean waters between San Francisco and Alaska. It measures up to four inches in diameter.

Then, the larger Southern butter clam grows up to seven inches long and has purple streaks of color inside its shell. These are commonly harvested from the waters between Humboldt Bay in Northern California and Baja California in Mexico. 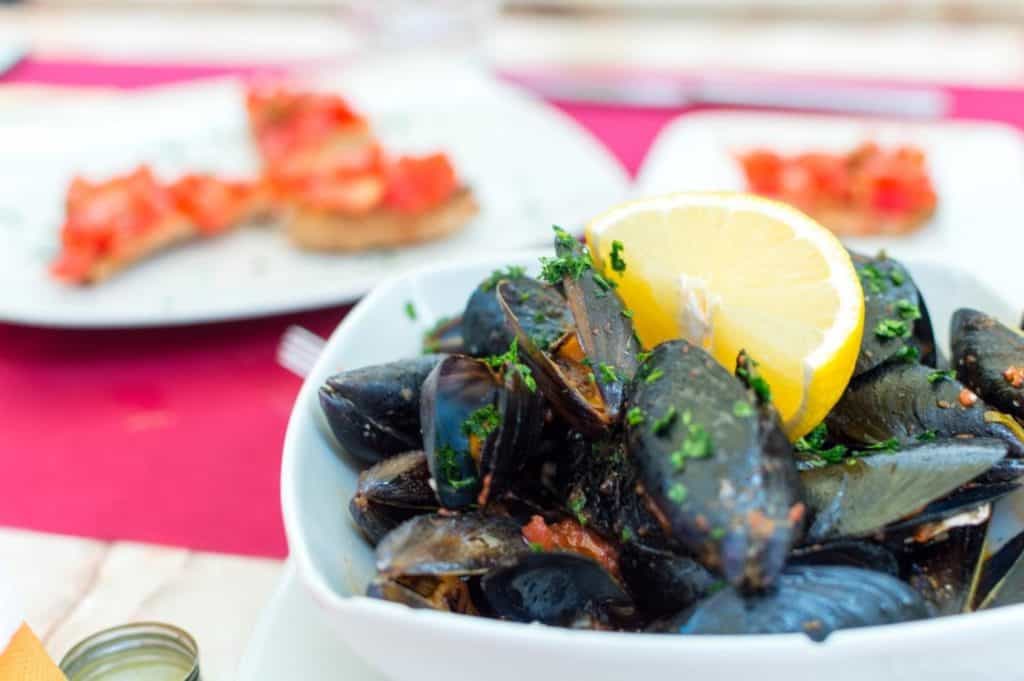 Mussels are yet another kind of bivalve mollusk that grows in saltwater habitats. You’ll find them along the exposed shores of the Atlantic coast between Virginia and the Arctic Ocean. They have long, oval-shaped, hinged shells that are navy blue-black in color.

Freshwater mussel species also exist and have a similar appearance to the saltwater variety, although these are generally not eaten. The majority of the mussels available today are commercially farmed.

If you come across a glossy heap of shells in your local grocery store or seafood market, those are usually live mussels. The best ones to buy are the ones with tightly shut shells. Always discard any that have missing bits of shell or gaping ones before cooking.

There are several different types of mussels, depending on the region you live in and the season. Here are the common ones you might encounter.

Similarities Between Oysters, Mussels vs Clams

Now that we’ve explored all the ways clams, mussels, and oysters are different, here’s a list of the similarities they share.

Here’s why eating these delicious mollusks is good for you.

There you have it – the difference between oysters, mussels vs clams. Here’s a word of caution, though. Ensure that you don’t have any pre-existing shellfish allergies before indulging in these delicious mollusks. These are more common than you might think and can be life-threatening.

If you’re worried about their mercury content, you should generally steer clear of these shellfish, especially if you’re pregnant. Other than that, consider making them a regular part of your seafood diet.

In the meantime, if you’re craving Japanese cuisine, check out our review of the 10 best sushi making kits.