Pumpkin empanadas- Homemade empanada dough is kneaded, rolled out, and cut with an empanada press, then stuffed with a savory filling made of softened leeks, pumpkin puree, and a hint of feta cheese. These little handheld pies are crispy, flakey, and baked to perfection. If you are looking for a new appetizer to wow guests, look no further than these pumpkin empanadas.

Pumpkin empanadas are a warm, cozy, and delicious way to enjoy the chilly weather months! These lovely little pastry pockets are filled with a delicious leek and pumpkin mix, then baked until golden brown and crispy. They're ideal for an on-the-go snack or as an eye-catching party dish that no one will be able to resist.

Move over pumpkin spiced lattes and pumpkin bread; there's a new pumpkin treat on the block! Pumpkin empanadas are delectable little handheld pies that are not only vegan-friendly but are also easy to make and far superior to anything you can buy in a store. These pumpkin empanadas are sure to be your new favorite pumpkin dish! 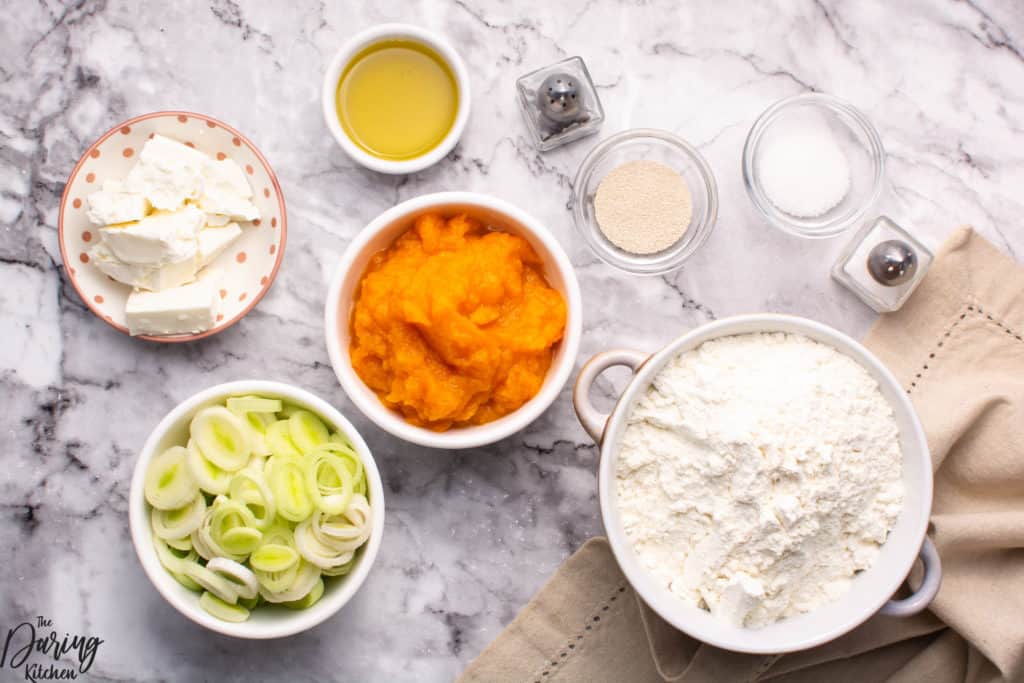 Ingredients For This Pumpkin Empanada Recipe

How To Make Pumpkin Empanadas

To make homemade savory pumpkin empanadas start by cooking the leeks in a skillet with olive oil, salt, and pepper. Once cooked, move cooked leeks into a reserve bowl, add pumpkin puree, and set aside. To make the dough, add flour, yeast, sugar, and salt to a mixing bowl, then add the water and olive oil and stir until smooth. When the dough is ready, roll out the dough and cut out circles with the empanada press. Fill each circle, and use the empanada press to close each one. Arrange filled empanada on baking sheets and bake. Once empanadas are done, serve warm.

What to Serve/Pair with Your Pumpkin Filled Empanadas

Pumpkin empanadas are a delicious treat that can be eaten by themselves or served with sides such as corn on the cob, Mexican Quinoa Salad, or even traditional rice and beans. 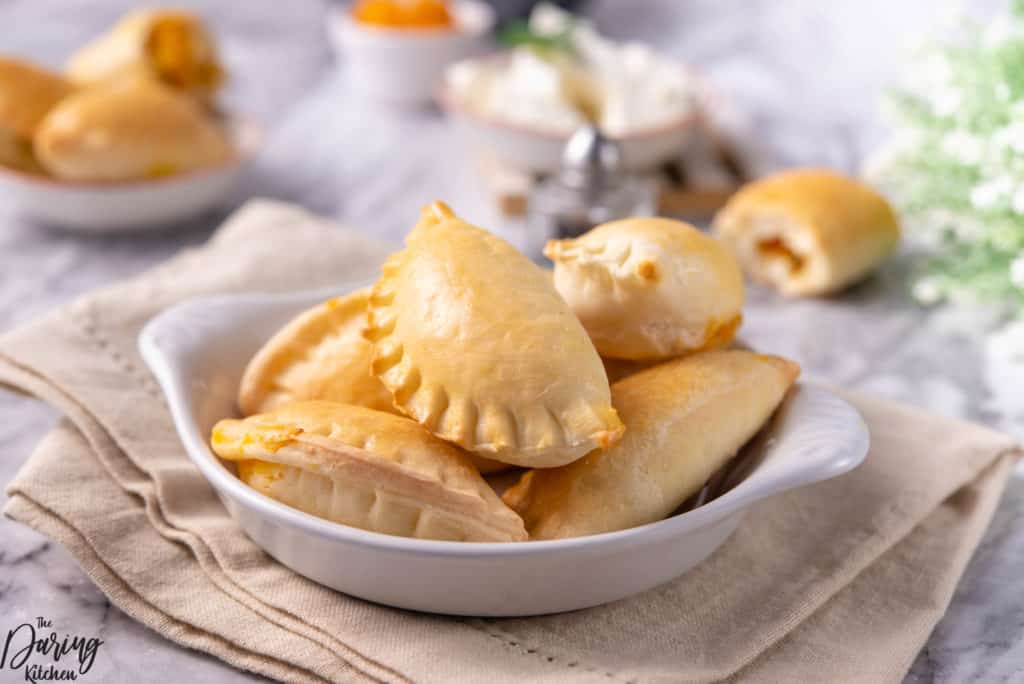 If pumpkin isn't your thing, there are a variety of other sweet fillings to try. Using jam, such as blackberry, strawberry, or your favorite jam of choice is a good idea. Chocolate pudding, apple butter, or even Vegan Mashed Sweet Potatoes are also wonderful options.

For a heartier empanada that the whole family will love, try stuffing the empanada dough with plant-based chicken, turkey, or beef and vegetables for a filling meal.

The filling for pumpkin empanadas can be made up to a week in advance and kept in the refrigerator in an airtight container. Simply pull the filling out of the fridge and stuff the empanadas as needed. Pumpkin empanadas may be refrigerated for up to three days after cooking. To reheat, simply bake or microwave the empanadas. The empanada shell might become soft and soggy when used in a microwave, so I suggest using the oven to keep the crust crisp and flakey. 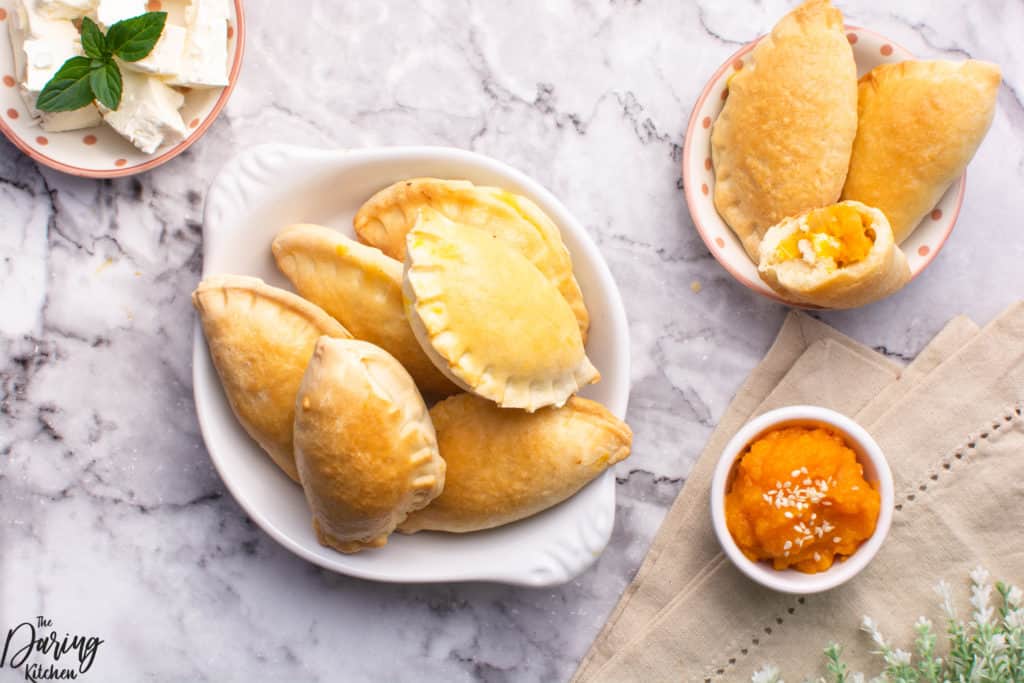 Can I freeze pumpkin empanadas?

Yes, you can freeze pumpkin empanadas. For best results, I would suggest making the empanadas then freezing them before baking. When you are ready to eat them, simply pop the empanadas in the oven to cook. Pumpkin empanadas can also be frozen from being baked, but they will lose their crispy, flakey texture during the freezing process. Frozen empanadas for good for about 2 months in the freezer.

Will frozen empanada dough circles sold at the grocery store work for this recipe?

Yes! You may make this dish with premade frozen empanada dough. When you're in a hurry, the premade dough circles are really handy. Keep in mind that if you have any dietary restrictions, you'll need to check the labels to be sure the premade dough is acceptable for you.

Can I use a food processor to knead the ingredients for the empanada dough?

Yes, empanada dough can be prepared in a food processor. Process the dough as directed until it forms into a dough. Don't overmix the dough, or it won't be flakey and will rise incorrectly.

Is canned pumpkin puree ok to use in this recipe?

Yes, canned pumpkin puree can be used in this pumpkin empanada recipe, especially if you are short on time. Homemade Pumpkin Puree always tastes better, but it is more time-consuming than canned.

Do I have to have an empanada press to make these pumpkin empanadas?