Seriously, if someone is wondering why am I talking today about some old fashioned and very special German cookies (they date back to 14th century) the truth is I found them on the internet while I was searching for something else a couple of years ago.
I can’t actually remember what was I searching for, but when I discovered these amazing cookies it was one of those “Oh My God” kind of revelations. I knew I had to learn how to make them, so I got some molds and started my own personal training.

My first attempts were a disaster. Believe me, don’t try to make Springerle in summer. They will not dry properly and/or they will keep not the shape or the beauty and the details of the picture on top of them. And don’t try to make them if you’re in a hurry. These cookies need their time. But if you have a little patience you will get a beautiful reward.

But before we got our hands and aprons covered with flour, let’s talk about Springerle history (from Ken Hamilton, the “Springerle baker”)

The general consensus from what I have found is that Springerle were first made in German speaking Europe, mainly Southern Germany, the Alsace region of France and parts of Switzerland.

Springerle molds were made from clay, wood and metal. Many of the ancient molds that have survived can be found in European museums and in private collections. There are a few collections in America as well...
…The origin of the Springerle name seems to be attributed to the fact that many of the first molds were of horses and their riders. Also, that some Springerle cookies seems to "spring up", when baked. There are dimensions formed as the cookie bakes, with the top "springing up" from the base.

Biblical scenes were some of the earliest images portrayed in Springerle. Other scenes soon followed that reflected daily life, such as holidays, births, weddings, engagements, country living, gardening, etc.

Springerle impressions have been used for centuries as tellers of tales, educational media, betrothal tokens between lovers and also just the pure enjoyment of everyday living…”

And now the recipe. I tried several versions and this is my favourite one.

Ingredients:
3 eggs (Room temperature)
400 grs powdered sugar
65 grs butter, softened
1/ teaspoon salt
½ teaspoon hartshorn* or baking powder
520g fine white flour (plus extra flour for dusting working surface and our hands)
1 teaspoon essential oil (These cookies are usually anise flavoured but I don’t like anise so I use other extracts, such as almond, lemon, vanilla or, as I did for this batch, orange)

*Hartshorn, also called bakers' ammonia (ammonium carbonate) It is an ammonia compound and not harmful after baking. However, don't eat the raw dough. Your kitchen will stink of ammonia while the cookies bake, but once baked, the cookies will not taste of it.

Can be substituted for equal amount of baking powder in any cookies recipe. It is an old-time leavening favored for cookies, such as German Springerle. It is said to give a "fluffiness" of texture baking powder can't. Its leavening is only activated by heat, not moisture (such as baking powder) 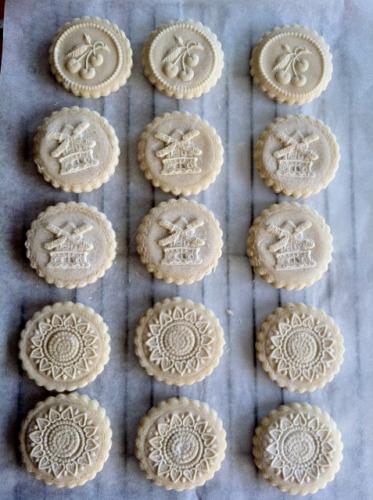 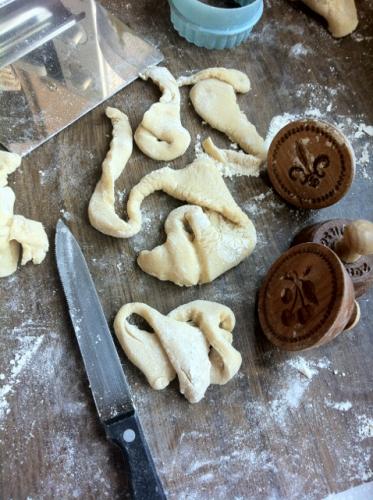 Springerle can be kept for weeks or months in airtight containers and they improve during this time.

And what to do when the dough becomes too dry and it is no longer suitable for molding? In Switzerland they use the rest of the dough to bake the traditional 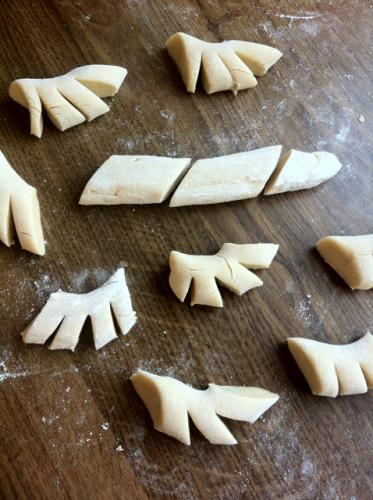 Just like the Springerle, the «Chräbeli» will also have little feet, and they’re soft on the inside and slightly crisp on the outside.

I hope you fall in love with Springerle just as I did. Please, try them because it's totally fun and different. And don’t tell me it’s difficult. Come on, aren’t you Daring Bakers?