Things seem to get complicated even when you’re shopping for what you’d expect to be the most straightforward of beans: green beans. On the sign at the produce bin, you might see “fresh string beans” but on the bag in the freezer aisle, it says “frozen green beans”. They all look the same–so what gives!

We’ll let you in on a secret. There is no difference between string beans and green beans! At least not anymore.

Read on and find out how green beans earned the name string beans, then learn about all of the different types of green beans, how to cook them, and more!

Any visit to the grocery store and you’ll notice that most products tend to use the “green beans” designation rather than “string beans”. The name “string beans” is not entirely obsolete, however, the reason behind the name is long gone!

The fact is, most bean pods used to have a fibrous “string” running along their seam, earning them the moniker, string beans. As anyone who’s eaten or cooked with snow peas or sugar snap peas knows, these strings are not pleasant to eat and are a total nuisance to remove. As the agricultural years wore on, green beans were cultivated to be without these tough strings, and now most varieties of green beans you’ll come across are string-less. A name is a tough thing to drop however, and although green beans have lost their strings, the name “string beans” remains tied to them.

All About Green Beans! 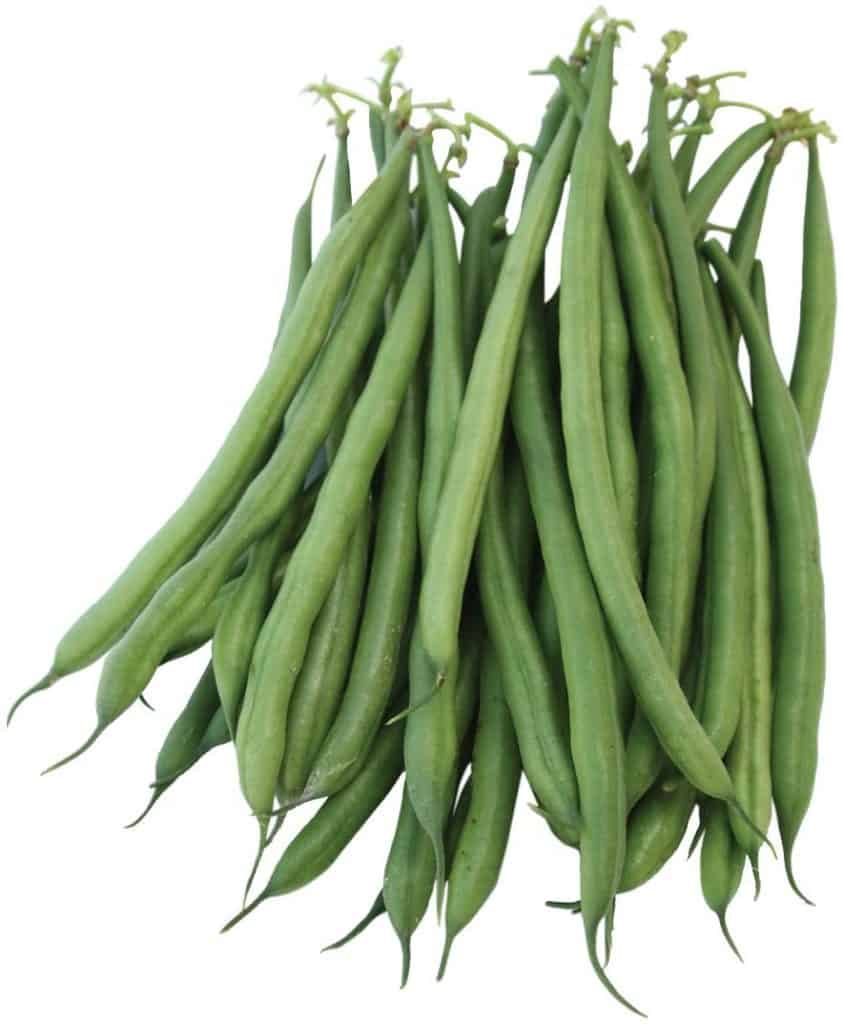 Many edible beans belong to Phaseolus vulgaris, a group of legumes also known as “the common bean”. This group includes a number of the beans we eat and love, including green beans or string beans! Beans, not surprisingly, are in the same plant family as other important crop legumes such as soybeans, peas, and peanuts.

In terms of culinary uses, common beans are divided into 3 categories, each of which represents the point in the growth cycle they are harvested and consumed:

Snap beans are those beans which are eaten in their entirety, pod and all. These tender pods are actually the unripe fruit of the bean plant and are called green snap beans after the characteristic snapping sound they make when broken in half. As the entire pod is consumed, green beans and string beans fall into the category of snap beans.

As green beans ripen and their seeds develop, they become larger and starchier. At this point, the pod is inedible but the seeds inside (also referred to as beans, confusingly enough) are tender and delicious! When consumed in this fresh form, they are known as shelling beans. Some types of shelling beans are borlotti beans (also called cranberry beans) and rattlesnake beans.

If the green beans continue to mature past the shelling bean phase, the seeds will eventually dry out completely, at which point they can be harvested for use as dried beans. Within the common bean family, there are several types of beans that are best suited as dried beans: cannellini beans and black turtle beans, to name a few.

Although there are tons of individual varieties of green beans and string beans, the plants themselves fall into two main categories:

As one might expect, bush beans are bean plants that grow much like a bush. They remain low to the ground, only ever getting about 2 feet tall, and their expansion width-wise is limited as well. These types of green beans tend to produce fruit earlier and mature faster than pole bean varieties, however their production window overall is shorter. Most beans that are eaten fresh and whole are of the bush bean variety.

Pole beans, on the other hand, are the sprawlers of the bean world. Also known as vine beans, runner beans, or climbing beans, these types of green beans can grow upwards of 8 feet tall! In order to reach their full potential, pole beans require the support of an external structure on which the tendrils can climb, such as a trellis, fence, or even the stalk of another plant. Most pole beans are allowed to mature before harvest as they are best suited as shelling beans or dried beans. Although some do produce pods which are edible as green beans when harvested young, such as asparagus beans, which we’ll get to in a minute!

Some Other Types of Snap Beans 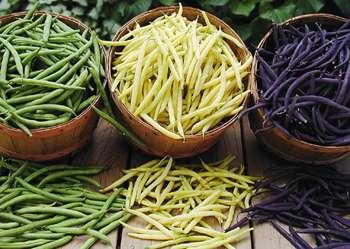 String beans or green beans (whatever you choose to call them!) are not the only type of snap beans. There are many varieties of beans that are consumed as a whole pod and they come in a range of sizes, and even colors!

Also known as French green beans or French beans, this variety of bush bean tends to be longer, skinnier, and more delicate than regular green beans. Haricots verts also have a wonderfully tender texture, making them easy to prepare and quick cooking. French green beans are perhaps most well-known as the star of Green Bean Almondine, a classic French dish in which succulent haricots verts are sautéed with butter, sliced almonds, and aromatics.

Not all green beans are green! But they can’t be called green beans if they aren’t actually green, now can they? This is where the term “wax beans” comes into play. This category of snap beans includes bush beans which come in other colors aside from your standard green. Yellow varieties of wax beans are commonly seen, as well as purple beans! The yellow beans will remain yellow after cooking, however purple beans oddly enough, will turn green as they cook.

Romano beans are a type of Italian flat beans, not to be confused with fava beans which are sometimes known as Italian broad beans. These beans come in both bush and pole varieties, and feature long, flat pods that have a satisfyingly meaty texture. Due to their size and makeup, Romano beans can handle long cooking methods such as stewing and braising, which would normally obliterate the texture of typical green beans.

While most green beans are in the common bean family, Phaseolus vulgaris, there are some exceptions! Asparagus beans, while actually more closely related to peas, are cooked and eaten more like green beans, and therefore are worth mentioning here. Also known as yardlong beans, asparagus beans are pole beans which can grow to amazing lengths–up to 1.5 feet in fact! You can cook asparagus beans in all the same ways that you would classic green beans. 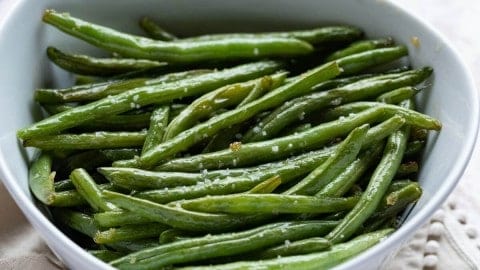 Speaking of cooking green beans, how do you do that?

There are SO many different ways to cook green beans, and we’ll go through a few of the main methods here. Exact cook times will vary depending on the type of green beans you’re working with. For example, those thick wax beans are bound to take longer than slender haricots verts.

How to Trim Green Beans

When cooking fresh green beans, the first step is always a quick trim. In order to trim green beans, line them up on your cutting board and snip off just the stem end. This is where the bean used to be attached to the rest of the green bean plant and it is tough and fibrous. You can leave the pointy tip on the other end as it is completely edible, and also has a nice look to it!

If you’d like to simplify the process though, you can trim off the ends on both sides. Hey, sometimes speed is the name of the game!

Next, you have a few choices to make. Would you like the ease of boiled green beans? Or the tender-crisp pods that can only emerge from a glorious steam bath? Or maybe you’re craving the toasty, rich taste of olive oil roasted green beans?

The choice is yours! Green beans are true chameleons and thrive in most any cooking method, making them perfect additions to a wide range of recipes such as soups, stews, braises, pot pies, warm vegetable salads, and even dehydrated in snack mixes!

How to Keep Green Beans Green!

We’ve all experienced the sadness of cooking a brilliant green vegetable and watching that fresh hue fade, only to be replaced with a dull green or brown. Thankfully, you can avoid this fate by blanching your beans! All you need is a bowl of ice water to dunk your beans in after cooking, in order to halt the cooking process and preserve the color.

It should be noted that blanching green beans is only advisable when employing wet cooking methods such as boiling or steaming. If you attempt to blanch roasted or sautéed green beans, you’ll only be removing all of that hard-won flavor!

Can You Eat Green Beans Raw?

There is no requirement that snap beans must be cooked, as they are plenty delicious when eaten raw. The only downside to consuming raw green beans is that some people experience digestive symptoms due to the presence of a compound called lectin.

This compound is found in all legumes but is much higher in beans that are mature and dried such as black beans or kidney beans. This is why these types of beans require soaking and cooking before being safe to eat. The amount of lectin in green beans is very low due to the immature seeds, making it unlikely to cause any trouble for all of you raw veggie lovers out there!

String Beans vs. Green Beans: There is No Difference! 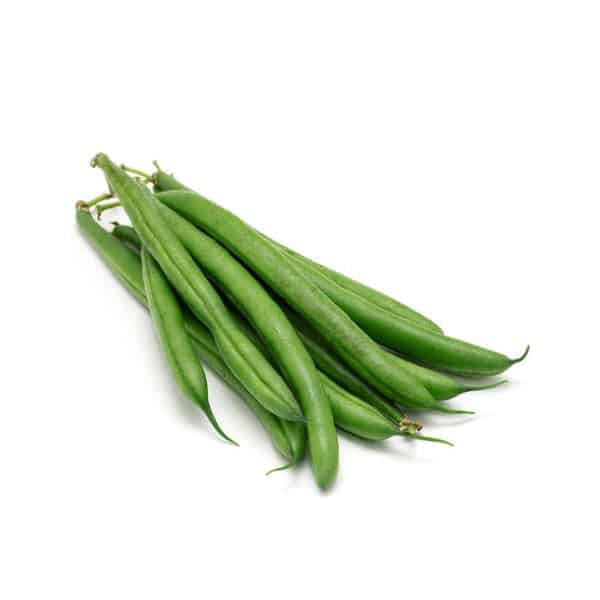 Bottom line: string beans and green beans are one and the same! While all green beans used to have a stringy exterior, this unpleasant feature was cultivated out many years ago. The beans we know today as string beans managed to retain their name, but not their strings.

The confusion doesn’t stop there though. The term “green bean” can refer to any number of different bush beans or pole beans, some of which aren’t even in the same family as each other!

While it’s fun and informative to learn about all of the different varieties of green beans, it’s not something you need to know in order to enjoy these silly little fruits. No matter the specific variety or name, when you come across the catch-all term “green bean”, you can bet that the entire crunchy pod is edible and will be packing a deliciously sweet, grassy flavor.