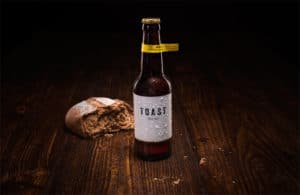 This International Beer Day, lift your spirits in more than one way with Toast Ale, a beer made using surplus bread…

“It takes almost nine months to create a loaf of bread. That’s eight months for the wheat seed togerminate and the plant to mature, then the crop is harvested, milled to flour and baked into bread. Huge amounts of resources are required, from the land, water, fertilizer and pesticides used in farming to the fuel and energy used for heating, processing and transporting the product from the soil to our sandwiches. So surely we should be celebrating the humble loaf, right? If you cultivate something for nine months, you expect at least a cursory baby shower. At the traditional harvest festival of Lammas (or ‘loaf mass’), farmers make loaves from fresh wheat to give as communion bread. Bread is the symbol of gratitude for an abundant harvest that will feed people whilst paying respect to the fertile land.

But there’s no celebration. We disregard the awesomeness of our food, throwing away 44% of all bread produced. We waste staggering amounts of resources producing food that we don’t eat, along with the toil and investment that goes into making it. And there are big ramifications. Agriculture is the single biggest impact we have on the environment in terms of climate change, soil erosion and biodiversity loss. Farming even impacts our oceans. Fertilizer runoff causes nitrogen blooms, which lead to algae growth that harms water quality, food resources and habitats, and decreases the oxygen that aquatic life need to survive. You probably hadn’t considered a relationship between bread production and fishing, but our wasteful food system causes negative impacts that are far broader than we appreciate. It’s the bread and butter(fly) effect.

We also live in an age in which 795 million people are undernourished and food poverty is a societal ill in even the wealthiest of countries. Yet the calories in the bakery goods thrown away in the UK alone are enough to lift 26 million people out of malnutrition. Our food system isn’t working for people or the planet. So why is so much bread wasted? Supermarkets overstock to make sure shelves are always full and consumers are always buying. Fresh bread is discarded daily to make way for the next day’s (over)supply. Even expensive artisan loaves are being thrown out. Small bakeries pour a lot of love into every loaf but end up with surplus for reasons as simple as an unexpected change in the weather – it’s raining, you’re not going to do a detour to the bakery. For consumers, bread is a readily available, low cost staple, with loaves selling for as little as 40 pence. If it’s not used up whilst fresh, or even if it goes past the unnecessary use-by- date, in the bin it goes. In the UK, bread is the most wasted household food item – 24 million slices are thrown away every day.

It’s time to change the system. We’ve got to stop producing and buying to excess. Industry could have a massive impact through simple initiatives: reforming confusing date labels, selling cosmetically imperfect produce, and transparently reporting supply chain food waste. We’ve got to intervene to prevent fresh, nutrient-rich food going to waste. Primarily it should feed people, with unsold food redistributed to food poverty organisations, but animal feed should be an option if that’s not possible. Still, even with all those options, there is still a massive excess of food going to waste.

We launched Toast ale to prove that there is a delicious, rewarding alternative to wasting our daily bread. We replace one-third of the barley used in a typical brew with bread that would otherwise be wasted – the crust end of loaves that are usually discarded by manufacturers producing sandwiches for retailers. With those heels, we’re kicking the system by highlighting wasteful practices and demonstrating a brilliant alternative. And all profits go to charity to support the bigger fight against food waste. We’re brewing a better way so you can drink for purposeful pleasure, not profit.

Let’s raise a Toast to giving our beautiful bread a better future! Someone wet the baby’s head…”

Previous Post: « The global spotlight is on Brazil – it’s time for the Food Revolution to really kick in
Next Post: Omelettes with a story – day 2 »