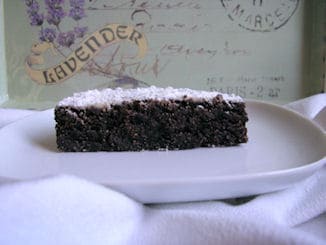 Capri, a summer day around 1920.Carmine Di Fiore woke up a little concerned that morning. The faces of those three men who ordered a chocolate cake the day before were frightening. At least that’s what he thought when he was told who they were: They worked for Al Capone, and even if they didn’t look that much like his thugs, he shivered picturing his body sinking in the Adriatic sea, with a concrete block chained to his feet in case they didn’t like the cake.

He came early to his laboratory and started to work. Hit the furnace and gathered all the ingredients on the table: flour, eggs, almonds, chocolate, butter, sugar…

When the cake was ready and he removed it from the furnace he couldn’t help but scream when he realized something got wrong: The cake was flatter and darker than usual, but why, why, why???? 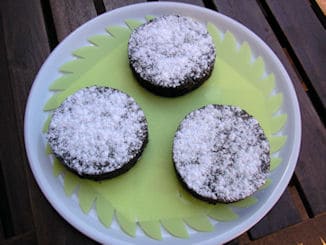 Suddenly everything was clear: the flour! He totally forgot folding flour in! He felt so angry at himself that he wanted to beat his head against the wall but he remembered Maria, his sweet Maria, and his sons, and his little daughter, and suddenly he felt so coward and selfish. So he set the cake aside, took a deep breath and since it was still early he started to prepare another one.

Before he could bake it someone ringed the bell. He cleaned his hands with his apron and went to open the door. His face turned pale when he saw Al Capone’s three men. One of them spoke: “Good morning. Please bring us the cake, we’re in a hurry. You know, yesterday the tailer who was supposed to make Mr. Capone’s new gaiters totally messed it up and after a little discussion he lost his head… if you know what I mean.” Carmine opened his mouth trying to say something but he couldn’t. He was terrified. But suddenly the three men started to laugh and they told “Be calm Carmine, we’re kidding!”, another man told. But he wasn’t that sure.

“So where’s that delicious cake?”, asked the third man, the smallest one, and he started to glance around the laboratory. When he saw the first cake over a shelf he went to pick it up and said “Hey lover, come to papa! Carmine! Bring us some chairs and we’ll see if they’re right when they say this is the best chocolate cake ever!”

The three men sat around the table while Carmine couldn’t gather the worth to tell them that he made a terrible mistake. Everything happened in a blink. They clambered themselves over to get a piece of cake and when the three of them tasted it they looked silently at each other for a while with a strange expression on their faces. Carmine started to sweat profusely, his heart beating so strongly he was afraid they could hear it. After a few seconds that seemed like years to him, they smiled and said at the same time: “We want the recipe!”

Later when he went back home Maria kissed him and asked him “how was your day”? Carmine hold her tight, exhaled grateful and relieved but finally said “Pretty much like the others, amore.”

Nobody knows what really happened, but I like to imagine it was this way…

And now the recipe. Please try it. Believe me, it’s a chocolate flavoured piece of heaven.

**You can also make an individual version as seen in the pictures.