There are a ton of fish in the sea, or the river, lake, or stream, and as a seafood/fish lover, it's easy to get lost in the variety of options available in the seafood section of my local grocery store. Two of the varieties I find myself bringing home most often are Trout and Salmon. While similar in texture, flavor, and appearance these two fish are quite different.

In this guide, I aim to break down the similarities and differences between trout vs salmon. I also hope to shed some light on great cooking techniques for both proteins, as well as some awesome destinations to head to if you are in the mood to catch your own trout or salmon. So let's dive in! 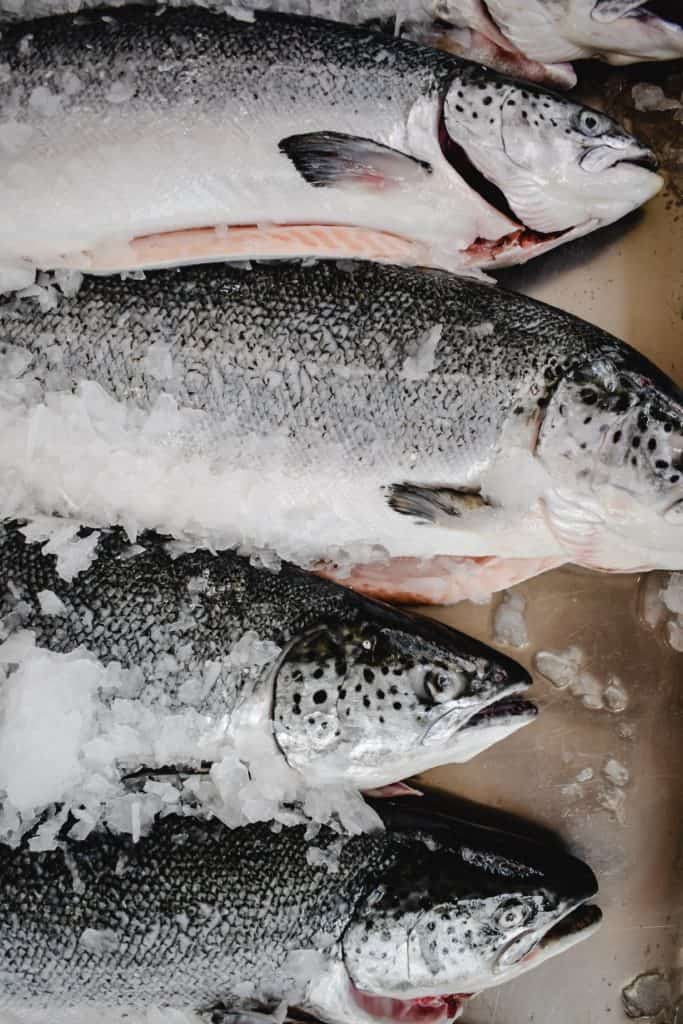 The Differences between Trout and Salmon.

While trout and salmon may look and taste similar they are distinct species of fish. The major difference between the two is that Trout is a freshwater fish, and Salmon is a saltwater fish. Salmon typically has a higher fat content than trout and is almost always larger in size.

To best explain the differences between Trout and Salmon I want to go in-depth into what makes each one special. Hopefully, by the end of this guide, you'll be able to identify each fish by sight and have a better command of how best to prepare either type of fish at home!

A trout is a group of freshwater fish found primarily in lakes, rivers, and streams. With a large rounded head, and a round body, trout can grow to be up to 30kg or 66 lbs in some cases, but most are much smaller. Trout come in a number of different varieties, from steelhead trout to the more colorful rainbow trout and beyond.

While trout may differ in appearance and coloring, they are primarily speckled and have a light pink to orange flesh. Trout normally live for up to 7 years and are known for being a fun fish to catch by anglers from young to old.

Where do trout live?

Trout primarily live in streams, lakes, and rivers, they like cooler waters and can be found in freshwater locaters around the world.

Some of the most notable trout fishing can be found in North America, and trout can be caught year-round thanks to their ability to withstand the colder waters during the winter. Trout fishermen use a number of different approaches to catch these amazing fish. Two of the most identifiable trout fishing methods would be fly-fishing or ice fishing.

Trout are a common fish and easy to find especially in mountainous areas with large freshwater rivers or lakes. Some of the best trout fishing can be found in the Mountain ranges of North American, but there are also plenty of great trout fishing destinations worldwide!

Trout is delicious and incredibly easy to prepare at home, especially if you are starting with pre-boned filets. Whether you are planning to pan-fry, steam, smoke, or grill your trout, there is a recipe waiting for you to try. When cooking trout at home there are some steps you can take to improve your experience and ensure the best possible results.

1. Use a sharp filet knife.

If you are lucky enough to be able to purchase your trout whole or catch your own then you are going to need a sharp filet knife.

Fileting fish, especially trout is a simple and straightforward procedure. I like to cut along the fin side of the fish above the spine, rolling the filet off of the fish with the knife as I go,

After the first filet is removed I flip the trout over and repeat the process. By using a sharp filet knife you are able to get the cleanest, prettiest cuts possible, resulting in a more even trout filet.

Making sure to remove all of the pin bones that reside in the flesh of trout is key to making sure you have the best experience possible. To begin, take your trout filet and run a finger carefully over the flesh to feel for the line of pin bones that runs the length of the filet.

Next, use a pair of fish tweezers or needle-nose pliers to carefully remove each of the pin bones. The bones should come free pretty easily, but a little force may be necessary. I like to pinch the bones between my fingers and press down on the flesh to help provide some tension which in turn makes it easier to pull bones free.

This may be a little time-consuming but it is key to getting the best texture out of your trout filet.

Trout has a light, delicate flesh that is super tender and delicious when prepared correctly. That being said, trout can dry out incredibly quickly and is prone to overcooking especially in the hands of the inexperienced cook. When in doubt cook the trout for less time, if you find our filet is slightly underdone (something that's rarely an issue) you can return it to the pan or oven to finish cooking.

Trout has a very light and subtle flavor that is incredible but is easily overshadowed by spices, seasonings, or sauces. I like to use simpler more delicate flavors when preparing trout, and often stick to a basic combination of salt, pepper, garlic, lemon, wine, and butter for an easy pan sauce after I've seared my trout filets.

Salmon and trout originate from the same fish somewhere down the line and are both parts of the Salmonidae family of fish. While Trout is a freshwater fish that primarily lives in lakes, rivers, or streams, Salmon is a saltwater fish for most of its life.

While Salmon spend the majority of their adult lives in saltwater habitats, they hatch in fresh water and migrate to the ocean. They return yearly in what is called the "run" to procreate. Every year salmon swim upstream in a salmon run to their spawning grounds a phenomenon that happens worldwide in places where salmon populations naturally occur.

Like trout, there are a number of different types of salmon, from Scottish salmon to sockeye salmon and king salmon, and many others. The majority of salmon flesh is orange in color, from a light pinkish-orange in some cases, to the deep almost red/orange of sockeye salmon.

Where do Salmon live?

Salmon populations exist worldwide, from Patagonia to Portland, Oregon. Native to the North Atlantic and North Pacific oceans, Salmon is a heavily farmed fish and populations have been introduced into a number of non-native locations.

Salmon is considered an anadromous species of fish, and they live in multiple habitats throughout their life span. Salmon are born in freshwater and migrate to the ocean. Salmon return to freshwater tributaries every year during the Salmon Run to procreate. 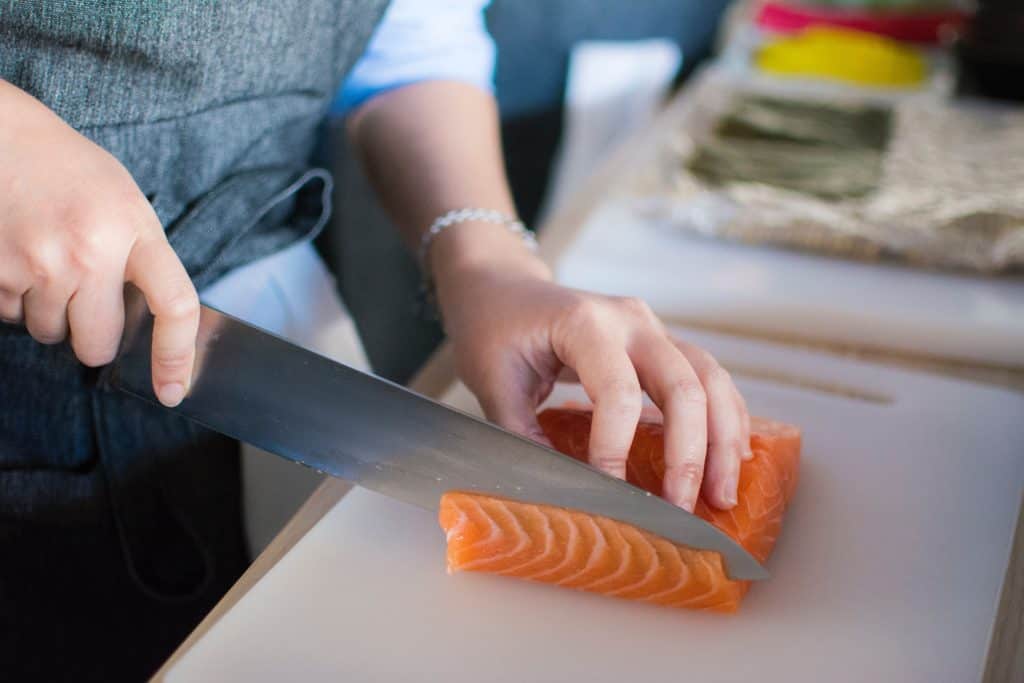 Sourcing quality salmon for your home kitchen is an incredibly easy process these days. With so many fresh options available, as well as individually quick frozen choices in your grocer's freezer sections, it's easier than ever to keep high-quality salmon filets on your table any night of the week.

When possible I like to prepare salmon fresh at home, and if available I like to buy a side or filet to portion for myself. This helps ensure the highest quality salmon possible and allows me the ability to prepare the filets to my liking.

By following these steps I am able to consistently get the best quality salmon possible and create incredible salon entrees that my family raves about.

1. Make sure to remove all the scales.

I like to pan-fry salmon fillets with the skin on, this helps the fish cook evenly, and crispy salmon skin is absolutely delicious but that effect can be ruined by finding a scale left on the skin. Make sure to remove all the scales if you are leaving the skin on the fish, this can be done by scraping the tip of a sharp knife or a fork along the skin against the direction of the scales. Make sure to rinse the filets before patting them dry and cooking them in your preferred method.

2. Remove all of the pin bones.

Like trout, salmon has a number of pin bones that run along the length of the filet, though they don't go quite as far down the filet as the trout bones do. You can remove them in the same way by using a pair of fish tweezers or a needle nose plyer. Again press down on the flesh with your fingers to expose the pine bone and carefully pull it out with the tweezers using even consistent force.

3. Use new and unique techniques to step up your salmon flavor.

Salmon can be eaten raw or cooked in almost any number of ways. From grilling on cedar planks to pan-searing, or curing and smoking, salmon has so many different applications you'll be hard-pressed to run out of options. I like to use strong, rich flavors, like curry, or spicy marinades to help accentuate the fatty richness of the salmon meat.

Salmon can make a great dip or salad or can be used to make cakes like crab cakes. You can slice it and serve it with vinegared rice wrapped in a sheet of nori for a super easy sushi hand roll or even barbecue with a mellow brown sugar rub. The options are endless for great salmon flavor as long as you've got the curiosity to try something new!

Trout and salmon are both incredibly healthy for you. Filled with fatty acids and healthy calories, proper fish intake is key to a quality diet as it helps with any number of things from heart health to brain development and mental acuity.

On the caloric side, these fish are definitely similar, but one is a bit richer than the other. Check out the chart below for a look at the Nutritional Facts for trout vs salmon. 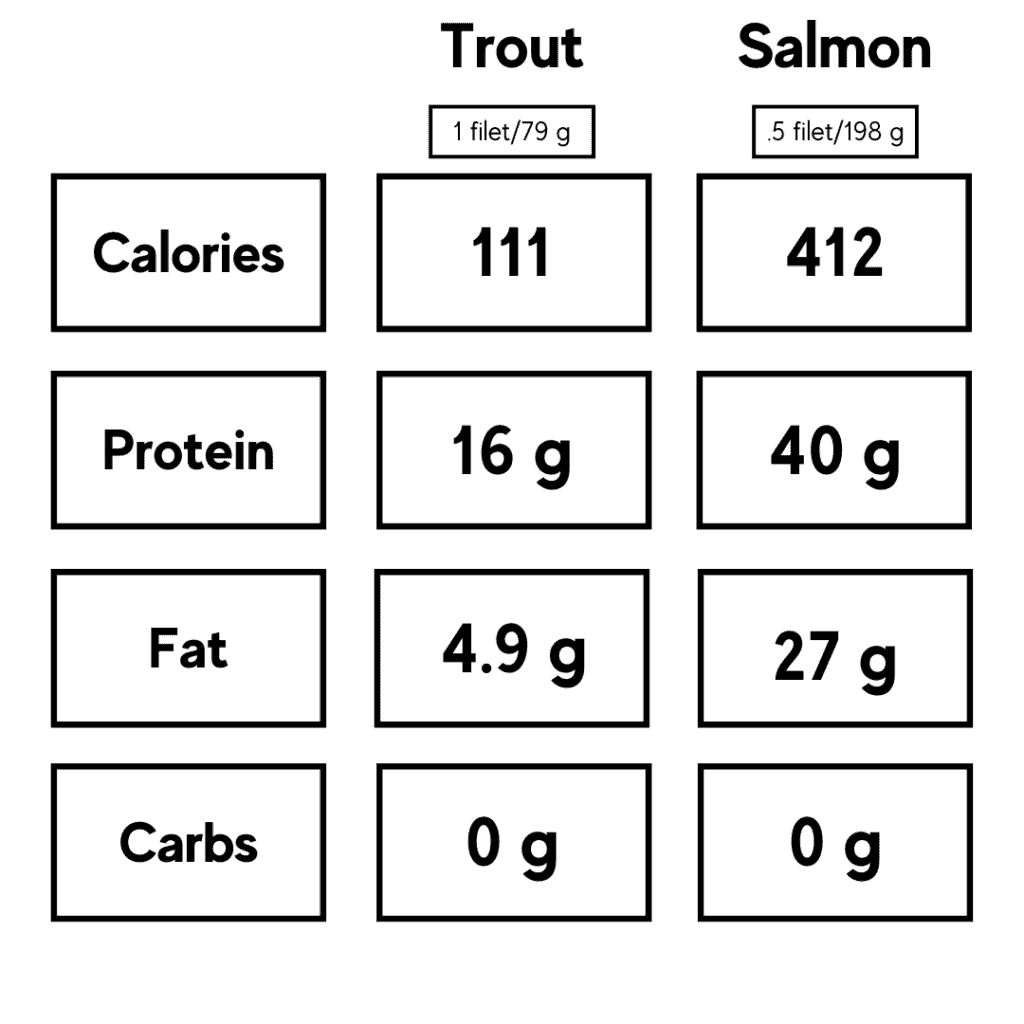 Overall, trout and salmon have a lot in common. They are descended from the same family of fish and have a similar structure. One is a freshwater fish for the entirety of its life, while the other spends time in different habitats depending on the stage of life it's in.

Salmon, is generally richer, larger, and more orange in color, while trout is smaller, lighter in flavor, and in color as well. Both are incredibly delicious sources of protein, and a great part of any balanced diet.