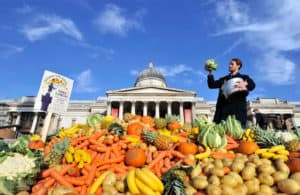 My personal food revolution began when I was 15 years old. Living in rural Sussex and looking for a way to make some pocket money, I bought pigs to rear and sell pork. I fed them in the most traditional and environmentally friendly way: scraps from the school kitchen, stale bread from the local baker, and surplus from farms whose potatoes were the wrong shape or size for supermarkets. I realised that most of the food I was giving to my pigs was in fact fit for human consumption, and that I was only scratching the surface of the food waste problem. All the way up the food chain, from farms, factories, supermarkets and our homes, we as a society are haemorrhaging good, fresh, edible food on a colossal scale.

At university, I continued my activism as a freegan – eating perfectly good food that had been discarded in supermarket bins. I did this, not because I needed to, but because I was incensed by our insanely inefficient and wasteful food system. It was a way of protesting against the shocking amount of food waste whilst enjoying the simple, delicious solution – eating it rather than throwing it away.

Between 2005 and 2009, I researched food waste around the world to learn why and how food is wasted, publishing the findings in my book ‘Waste: Uncovering the global food scandal’. What I uncovered was alarming. Even as 1 billion people struggle to put healthy food on their plates and feed their families, globally we waste over one third of the food we produce from farm to fork. Even in high-income countries like the UK, almost 25% of the population is at risk of poverty or social exclusion and over a million people have been helped by food banks. Yet food availability in rich countries represents 150-200% of nutritional needs.

Food production is also the single biggest impact we have on the environment – deforestation contributes to climate change and biodiversity loss, methane from livestock farming is a highly potent greenhouse gas, fertilizer run-off produces nitrogen blooms in oceans, and heavy amounts of water, fuel, and other energy inputs are required for farming. We are not just wasting food but all of the resources used to produce it and the climate change implications of leaving it to rot.

Yet there is a positive movement. People across the globe are using their creativity and love for food and the planet to fight food waste. Feedback, the environmental non-profit I founded, fosters collaborations between these passionate individuals and organisations to take back control of the food system.

Our campaigning work fights food waste at every level. The Pig Idea campaigns to lift the EU ban on feeding catering waste to pigs. The Gleaning Network rallies volunteers and food redistribution charities to salvage fresh fruit and vegetables from farms across the UK and Europe, whilst we fight for farmers who incur the burden of this waste due to supermarkets cancelling orders at the last minute or rejecting produce due to cosmetic standards.

But perhaps the most well-known of our campaigns is Feeding the 5000. It’s a one-day food festival that raises public awareness about food waste, elevates the conversation around food and sustainability policy, and champions the easy, fun and tasty solutions. At each event we serve up a delicious meal for 5,000 people, made entirely from fresh, top-quality ingredients that would have otherwise been wasted. The free feast is served alongside activities such as cooking demonstrations, tastings, smoothie and juice making, and talks by local and national leaders in the space.

What began as a one-off event in London’s Trafalgar Square in 2009, bringing together a coalition of environmentalists, chefs, and anti-hunger organizations, and linking them to supermarkets and restaurants with surplus, has expanded into a global campaign that has touched every inhabited continent.

This week, with the support of The Rockefeller Foundation and a coalition of partners, we hosted Feeding the 5000 in New York City. The event was a huge success, with people from all walks of life joining us to share the food and getting involved by taking a pledge to reduce their food waste and call on businesses to do the same (join them here).