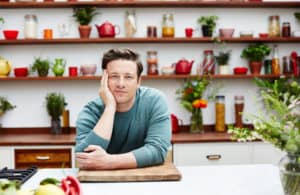 Just over 17 years ago, back in April 1999, I appeared on television in the first episode of The Naked Chef. Even in those very early days, my intention was just to inspire viewers to get in the kitchen and give cooking a go, just as Delia Smith and Keith Floyd had inspired me with their programmes. I particularly wanted to get the boys back in the kitchen – for some reason cooking had got a bad rep among the lads and they seemed to be dragging their heels a bit. I wanted to prove that cooking wasn’t just for girls, but actually it could get you girls!

I had no idea then just how much of a phenomenon The Naked Chef would become.

So it turns out that I did inspire quite a few people, and many of them were mums and dads. I’ll never forget being chased down the street by this big, muscley bloke one day and when he caught up with me, I genuinely thought my days were numbered and he was going to punch me but he simply smiled and said: “My missus said I should start cooking because of you and if I’d seen you a few weeks ago, I would have lumped you. But actually, I’m really enjoying cooking and I’m better than you now!” That was one of those moments where I started to understand just how powerful food can be in changing people’s lives for the better.

When I decided to tackle school food a few years later, it was because I knew that if you could improve food for kids for the 190 days of the year that they’re in school, and in lots of cases that’s two meals a day eaten away from the home, then that would be a huge and significant step towards improving their general nutrition.

And that’s powerful stuff, don’t get me wrong, but the true battle is one that happens in the home.

That’s why the YouGov research carried out by the Huffington Post this week is really interesting but also slightly worrying – the results mean we still have a very long way to go when it comes to inspiring parents to cook better food for their kids. The fact that 21% of parents admit to telling fibs about what they feed their children suggests that there are many parents who know they should be cooking more nutritious meals but, for whatever reason, feel that they can’t.

More concerning still, is the statistic suggesting that only 21% of parents are cooking from scratch every day, which means that the majority of kids are still eating processed food. When you read figures like this, it’s hardly a surprise to learn that around one in five children is overweight or obese before they even start primary school.

Two other pieces of recent research are also worth a mention. Cancer Research UK reported earlier this month that children regarded junk food advertising as “addictive” with one saying that it made them want to “lick the TV screen”.  Meanwhile, the Infant & Toddler Forum’s own study found that 79% of parents were over-estimating portion sizes for their kids.

Taken together, in addition to regular warnings from the British Medical Association, British Dental Association, National Obesity Forum and dozens of other expert bodies working in health and nutrition, this research makes for quite terrifying reading.

Now I’m not out to make anyone feel bad, and I know that being time poor can be a really big factor in what decisions you make, but cooking from scratch doesn’t have to mean slaving over a stove for hours. What I really want to do is continue to inspire and empower all you parents out there who want to feed you kids better, to feel that you have the weapons in your arsenal to do so, whether it’s quick fixes, batch cooking, slow cooking, whatever works for you. I’ve spent over ten years working in food education, providing tools to help people learn to cook, whether it’s buying a cookbook, watching a TV show or taking a cookery course, or of course, taking advantage of all the free stuff out there on my website that’s readily available at your fingertips.

A study carried out in Australia by Deakin University showed that people who took my Ministry of Food course were more likely to continue to cook from fresh, eat more fruit and vegetables, and generally feel healthier and more confident. Today, a new study by the University of Leeds into their local Ministry of Food Centre comes up with the same results. Knowing how to cook is an essential life skill. It enables you to feed yourself, and your family, better, and in the bigger picture it is invaluable in the global fight against diet-related disease and obesity.

This brings us back to the Huffington Post survey results, which reveal that just 12% of parents cook with their children every day, with one in ten saying that they never cook with their kids at all.

To me, this is shocking and to be honest, just really sad for those kids. Cooking together is such a joy (OK, it’s messy but you’ve just got to embrace that before you start – the results are worth it) and it’s also one of the main reasons why some children have a wider variety of foods in their diets. If kids are involved in growing and cooking food, then they’re far more likely to eat it.

That sense of ownership can’t be beaten. Start them young, just tearing up fresh herbs, bashing up spices or even squishing fruit, and they’ll be well on the way to being healthier young people.

I believe it’s a parent or guardian’s duty to help teach their kids about food. For those 175 days a year when they’re not at school, we should be inspiring them with a range of fresh foods. I hope that the government’s long overdue Childhood Obesity Strategy will include measures to help parents, particularly those on a budget.

Cooking with kids is fun. And more importantly, it’s likely to help them towards living long and healthy lives. So if you do one thing this summer holiday, get in the kitchen – or even go a bit Huckleberry Finn and do it outdoors – but please, just start cooking with your children – you won’t look back.

This summer The Huffington Post UK is spearheading an initiative helping families thrive, with a focus on parent wellbeing, the challenges facing stay-at-home and working parents, friendships and navigating the landscape of modern parenting beyond the 2.4. Check out Jamie’s blog on the Huffington Post here and join the conversation online with #ThrivingFamilies and #FoodRevolution. Check out Jamie’ new Family Food hub here.

Previous Post: « These countries have committed to tackle child malnutrition, has yours?
Next Post: As the old saying goes – “waste not want not…!” »